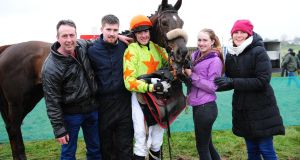 Arriving into Ballydonagh Stables on a Saturday morning and you wouldn’t know what you might stumble across . . . riders falling, horses falling or riders jumping horses without saddles. Equestrian establishments have been closed down for less but, in this Co Wicklow yard, it is business as usual.

When Ger Lawless first opened his stables in Delgany, on the outskirts of Greystones, 11 years ago, it was as a horse racing yard and, while things have changed over the years, there are still a few race horses in situ. In fact, Lawless trained a winner recently under point to point rules when the aptly named Delgany Lass provided son Brian with his first winning ride.

But the initial ambition for the yard didn’t ride out the recession. With disposable income in short supply, the first thing to go is unnecessary expense – which most certainly includes owning your own racehorse. Lawless lost owners and had to adapt in order to stay afloat.

“I moved on from that and I came into sport horses which I wasn’t that familiar with – hunting, show jumping and event horses. Eventually I met a guy called Pete Miles. I had met him about 10 years ago but we’d had no contact since.

“When I ran into him again, he asked if I’d be interested in bringing a horse to a film set one day. So I went along and we did a scene for Penny Dreadful and it worked well. Then there was a couple more horses needed, so Pete asked would I supply a couple more. I had a couple of horses suitable for film work – it’s not every horse that would be suitable – and we went from there. We got to know each other a lot better and things rolled on.”

Miles, a stunt performer from the UK, now houses his stunt horses at Ballydonagh when they are required for filming in Ireland. These horses are not just extras but specifically trained to perform the stunts you see in the films and Lawless’s sand arena provides a comfortable practice area for stunts such as asking the horse lie down or fall over like it’s been shot.

“There was a market there for stunt guys to learn how to ride and so they started coming here for lessons and training up on stunt work. They are stunt men before they come, some of them can ride, and some of them have never sat on a horse.

It takes the riders roughly six months to get trained up and they have to pass exams where they display what they are capable of so they can add it to their CV of stunt talents. When the actors are not busy working on shows like Into the Badlands and Vikings, Lawless doesn’t just teach them how to ride but all the aspects of horsemanship.

“They would be riding a couple of horses every day and getting very handy on a horse, learning how to pick out their feet, tack them up, brush them over, water them, hay them, feed them. That’s all a part of it.”

Livery horses fill up the rest of the 28-stable yard, mostly hunting and competition horses and the occasional happy hacker. Lawless provides full livery where the yard looks after, feeds and cleans the stables for the owners, providing the sand arena with show jumps, a log jumping paddock, and easy off-road access to the neighbouring Glen of the Downs woods for hacking.

“It would be very hard to gauge if you were only going to do film work in this country because there’s not the volume of films or keeping horses for films,” he says. “When it’s there, it’s great but more times it’s not there so, with that, the livery end keeps you busy. It’s the livery end that’s the bread and butter, you work hard at that.”

It’s a family affair. Eldest son Seán studies business in Carlow and helps out in the yard on weekends, Brian is studying for his Leaving Certificate this year and, along with his younger sister Katie, rides out before school in the mornings.

Lawless’s wife Annemarie “would come over in the mornings, she’d put horses on and off the walker, take horses in and out of the field all the basic running of that end of the business and she also does all the paper work and the hard graft at the other end”.

“It’s been a difficult seven or eight years with the recession,” says Lawless. “We lost so many owners, good owners. [It’s] just nobody’s fault, business went bad for them, they pulled out. Lucky enough some of the film work came in – if that hadn’t come in, I’d say I probably would have been gone at that stage.”