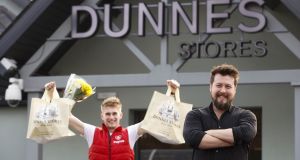 Dunnes Stores has confirmed a move into home deliveries with a new partnership with Buymie that will see customers able to order groceries from 24 stores in the greater Dublin area and in Cork city for same day delivery.

Under the new partnership, which is restricted to groceries, customers will be able to book delivery slots for as little as one hour or up to seven days in advance.

Dunnes, which according to data from Kantar, is currently the second most popular grocery chain behind SuperValu, has been toying with the idea of moving into online retailing for some time with plans to provide home deliveries accelerated in recent months due to the Covid crisis.

Online grocery sales have surged during the pandemic and are still rising despite the easing of lockdown restrictions. Sales grew by 121.7 per cent over the four weeks ending September 19th, according to Kantar with new shoppers accounting for almost a quarter of the €133.6 million spent on online groceries in the previous 12 weeks.

Dunnes made its first, tentative steps into grocery delivery from its flagship outlet in Cornelscourt, south Dublin, earlier this year for customers living within a 10km radius. It had been consider widening this with a full delivery service from a so-called “dark store” – a dedicated fulfilment depot with easy access to the M50, that would have allowed it to reach customers quickly with its own delivery trucks.

Many grocery retailers have declined to follow in the footsteps of rivals such as Tesco and SuperValu with their own dedicated fleets however because these are often uneconomical.

Lidl has partnered with Buymie for home deliveries, with Tesco customers also able to avail of a similar service. Aldi recently announced a trial with Deliveroo, while BWG, the owner of Mace, Londis and the Irish branch of Spar, is currently weighing up home deliveries.

To access the new delivery service, customers can download the Buymie mobile app and once registered can select to shop for groceries within the Dunnes online grocery store.

All customers have access to their own personal shopper who will let them know if items are out of stock, and offer alternatives. Customers can also add a request for shoppers to look for items that they can’t find themselves on the app.

Buymie, which also has home delivery partnerships with Tesco, Co-op and ASDA in the UK, raised €5.8 million in funding earlier this year and announced 200 jobs on the back of increased demand for its services.

Founded by Devan Hughes and Art Sokhikyan in 2014, the company has secured more than €10.5 million in investment to date. It announced plans to expand in Cork in late August.

“Dunnes Stores is a tremendous innovator in Irish retail and we are delighted to be working with them to bring same-day delivery to their customers across Dublin and Cork”, said Mr Hughes, the company’s chief executive .