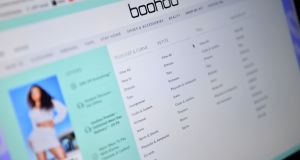 Boohoo, which has grown into a company with a market value of more than £4 billion (€4.4 billion), acknowledged the need for change.Photograph: Ben Stansall/AFP via Getty Images

An independent review for fashion retailer Boohoo found many failings in its English supply chain after allegations about working conditions and low pay, the company said on Friday, setting out steps it was taking to tackle the issues.

Boohoo commissioned the review, headed by senior lawyer Alison Levitt, in July after damaging reports in the British media about factory working conditions in the city of Leicester in central England.

“Ms Levitt is satisfied that Boohoo did not deliberately allow poor conditions and low pay to exist within its supply chain, it did not intentionally profit from them and its business model is not founded on exploiting workers in Leicester,” Boohoo said in a statement.

Shares in the company, which sells own-brand clothing, shoes, accessories and beauty products targeted at 16- to 40-year-olds, were up 11 per cent in early trading on Friday, on track to regain much of the market value they had lost since the July media report.

Boohoo said the review found that some workers in its supply chain had not always been properly compensated for their work and that many workers were not fully aware of their rights and their obligations.

It said it recognised that this was a widespread issue in the garment industry and committed to establishing and funding a Garment & Textiles Community Trust governed by independent trustees to address hardship.

Boohoo, which has grown into a company with a market value of more than £4 billion (€4.4 billion), acknowledged the need for change.

“This [review] has identified significant and clearly unacceptable issues in our supply chain and the steps we had taken to address them,” Boohoo chief executive John Lyttle said.

“It is clear that we need to go further and faster to improve our governance, oversight and compliance,” he said.

“Overall, we see the results of the review as being broadly in line with our expectations, and think the changes being called out represent further steps forward on the path to rebuilding investor confidence in Boohoo’s social responsibility,” JP Morgan analysts said.