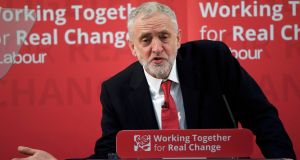 Ask someone what constitutes an excessive salary and they’ll invariably come up with a figure that’s some way above their own pay package. But exactly how much is too much?

British Labour Party leader Jeremy Corbyn weighed into the debate on inequality and excessive earnings on Tuesday, suggesting a wage cap be imposed on high earners. Just as the national minimum wage is enforced by legislation, so too should a national maximum wage, he said.

The Labour leader declined to define excessive pay but said the figure was somewhere north of his own annual salary of £138,000 (€158,920). No surprises there.

“Why would anyone need to earn more than £50 million a year?” he said, slamming the pay of top-level footballers and chief executives alike as “utterly ridiculous.”

While many workers on the national average salary of around £28,000 (€32,240) might welcome a cap on fat-cat earnings, Corbyn’s proposals were greeted with widespread derision in the City among business leaders – and members of his own party, who appear to have been caught on the hop by their leader’s plan.

The Adam Smith Institute dismissed it as “bananas” although, with remarkable restraint, it avoided the use of the words “peanuts” and “monkeys” in its response. “If we want Britain to boom, we need to let business hire who it wants and pay them what it wants,” said director Sam Bowman.

Danny Blanchflower, a former economic advisor to Labour, was more forthright, dismissing the idea as “idiotic.” The economist, who is a former member of the Bank of England’s monetary policy committee, said if he were still an advisor to the party “I’d have told him it’s a totally idiotic unworkable idea”.

Corbyn dropped his high-pay bombshell in a round of early morning radio and television interviews intended to “reboot” his controversial Labour leadership. Any impression that he might have been making policy on the hoof was hardly allayed later in the day when, in a scheduled speech, there was no mention of the maximum pay cap.

Instead, he listed a number of alternative ways of tackling pay inequality, including a limit on the ratio of pay between bosses and their workers. If firms wanted to remain eligible for government contracts, then top pay should be limited to a multiple of less than 20 times shop floor staff, he suggested.

As the living wage is around the £16,000 (€18,430) level, that would indicate a maximum salary in the region of nearly £350,000 (€403,165) for chief executives, well below the multimillion pound pay packages many of them currently enjoy – unless wages of the workers are raised too.

In his speech Corbyn recalled that on Wall Street in the 1920s, the investment-banking firm JP Morgan had limited salaries to 20-times that of junior employees. It cannot be fair, the Labour leader said, to have executives earning in a few days what teachers or nurses made in a year.

He also floated the idea of a new tax for high earners, who must pay their fair share – it cannot be right that a cleaner pays more tax than a chief executive, he said.

Another suggestion was a government-backed kitemark for companies that have agreed acceptable pay ratios between the highest and lowest earners, which would allow consumers to judge for themselves.

Corbyn’s intervention into the thorny issue of pay inequality came just days after “Fat Cat Wednesday” (January 4th), so-called because, just four days into the year, Britain’s top bosses were calculated to have already earned more than the typical worker will earn in the entire year.

The calculations, from the High Pay Centre, showed the average FTSE 100 boss earns over £1,000 an hour, 129 times more than the average employee.

The main focus of Corbyn’s speech and media interviews yesterday was supposed to have been Brexit, but the seemingly off the cuff remarks on pay totally derailed that plan, to the anguish of many of the party faithful.

But there was praise for Corbyn from former Labour leader Ed Miliband, who when he headed the party famously promised to improve the lot of Britain’s “squeezed middle.”

Miliband had been equally reluctant a few years ago to provide an exact description of just who fell into the squeezed middle category, restricting himself to a broad definition of “those who were working but not on six-figure salaries”.

Corbyn “is totally right to be setting agenda on the crucial issue of obscene pay”, Miliband said, “whatever precise mechanism.”