Sales at stores open over a year rose 0.1% in the 15 weeks to early January 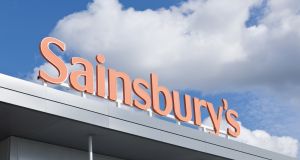 Sainsbury’s, Britain’s second biggest supermarket, on Wednesday beat forecasts for underlying sales in its Christmas quarter and said it was well placed to deal with the pressures it faces in 2017.

Sainsbury’s joins the fourth biggest supermarket Morrisons in reporting a better than expected performance while market leader Tesco is also expected to have done well, indicating the British public was happy to splash out on food at Christmas.

The firm, which last year purchased Argos-owner Home Retail, said sales at stores open over a year rose 0.1 per cent, excluding fuel, in the 15 weeks to January 7th, its fiscal third quarter.

That compared to analysts’ average forecast of a fall of 0.8 per cent and a second quarter decline of 1.1 per cent.

“The market remains very competitive and the impact of the devaluation of sterling remains uncertain,” said chief executive Mike Coupe.

“However, we are well placed to navigate the external environment and remain focused on delivering our strategy.”

Unlike Tesco and Morrisons, Sainsbury’s is not in turnaround mode and has not had to rebase its like-for-like sales performance.

Some investors have expressed concern the Argos takeover unwisely increases Sainsbury’s exposure to higher import costs given the depreciation of sterling since June’s vote on Brexit.

Argos’ like-for-like sales rose 4.0 per cent. Sainsbury’s highlighted strong performances from its online and convenience channels over the Christmas quarter with sales up over 9 and 6 per cent respectively.

Online sales made up 18 per cent of total group sales in the quarter, which rose 0.8 per cent, excluding fuel.

The supermarket said its clothing and general merchandise businesses also had a very strong quarter, with sales up 10 per cent and 3 per cent respectively.

Prior to Wednesday’s update analysts were on average forecasting a pretax profit for 2016-17 of £573 million (€660 million).

Shares in Sainsbury’s, up 12 per cent over the last six months, closed on Tuesday at 259 pence, valuing the business at £5.7 billion.