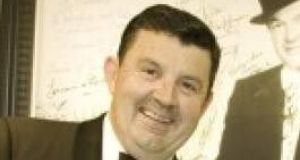 Jerry Conlan: one of the “Maple 10” developers who tried to save Anglo Irish Bank in a secret share-buying scheme, he has joined the NolaClan board.

It is understood that the deal will see the two men team up for further Dublin expansion of NolaClan, which owns a string of well-known city nightspots including Xico, 37 Dawson Street, House, The Oak and 9 Below (an exclusive reservations-only bar that opened on St Stephen’s Green just before Christmas).

Viztip, a company linked to Mr Conlan with US institutional backing, has invested about €3.5 million for a share of NolaClan. A spokesman for the group confirmed the deal, which was brokered by the boutique outfit Warren Private, was for a minority share “in excess of 25 per cent”.

Mr Conlan, who owns the Central Hotel on Dublin’s Exchequer Street and one of the so-called Maple 10 developers who tried to save a then-floundering Anglo Irish Bank in a secret share-buying scheme in 2008, has joined the NolaClan board as part of the deal.

Viztip is owned by Bridlewood, an investment trust linked to Mr Conlan, which has substantial financial firepower in the form of debt funding from US property investment group Grand Coast Capital.

Viztip also appears to be the main investor in well-known city establishment the Globe and Rí Rá nightclub, which was sold last year to a consortium fronted by the Murray family behind McSorley’s in Ranelagh.

Mr Conlan has been frantically snapping up properties in Dublin over the last year, particularly in the Dublin 2 area close to Dame Street, which is due for major development in coming years as part of a council-backed redesign.

It is understood Mr Clancy may open pubs in some of the buildings acquired by Mr Conlan. The developer recently bought an office block at 37 Dame Street, directly opposite the former Central Bank, and it is likely that a major city venue will open there.

In conjunction with Grand Coast, Mr Conlan is also developing a new hotel on nearby Trinity Street. They have also lodged plans for another hotel at Shamrock Chambers on Dame Street.

The news that a US-funded Mr Conlan is joining forces with Mr Clancy sets the scene for a potential pub-baron rivalry with Paddy McKillen’s rapidly expanding Press Up Group, which has conquered the city’s pub market with a succession of openings such as the Stella and the Liquor Rooms.

Mr Clancy, a former manager of the Wright group, has also expanded at lightening pace recently, and is routinely linked with almost every pub that comes on the Dublin market that is not bought by Press Up.

He has assembled a chain of more than 15 fashionable pubs and restaurants in Dublin and further afield, most of which, but not all, are assembled under the NolaClan banner.

The group’s venues also includes Mrs Robinson’s in Greystones, as well as House Limerick and the Oyster Tavern in Cork.

NolaClan expanded further this month with the opening of House Belfast, while Mr Clancy, who also owns a pub in New York, has separately backed other recent openings such as Brogan’s in Kilkenny in conjunction with Dublin GAA star Bernard Brogan.

He is also a shareholder in other pubs outside of the NolaClan structure, including the Villager in Chapelizod, and he is due to open a new pub in Athlone with Declan Murphy, the drummer in Niall Breslin’s band, the Blizzards.