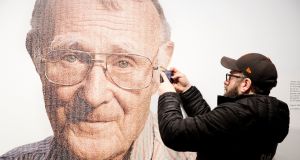 A visitor to the Ikea museum in Almhult, Sweden, takes a photo of a portrait of the late Ingvar Kamprad, founder of Swedish multinational furniture retailer Ikea, today. Photograph: Ola Torkelsson/TT News Agency/Reuters

Sweden is mourning the death at 91 of Ingvar Kamprad, the billionaire founder of flat-pack furniture leviathan Ikea.

A global Swedish brand and ambassador to rival the status of pop giants Abba, Mr Kamprad’s cost-conscious, self-service stores revolutionised – and democratised – furniture design and interior decoration. The firm’s products are now so ubiquitous that an estimated one in 10 Europeans has been conceived on an Ikea bed.

Famously frugal – reusing teabags and flying economy class – Mr Kamprad’s most robust design is not the Kilppan sofa or the Billy bookshelf, but the Ikea empire itself.

Though it wraps itself in the Swedish flag and identity, Ikea comprises an opaque construct of trusts, holding companies and subsidiaries based in the Netherlands, Luxembourg and Liechtenstein that is currently facing an EU tax avoidance investigation.

Jesper Brodin, chief executive of the Ikea Group, said Mr Kamprad’s legacy, “to create a better everyday life for the many people, will continue to guide and inspire us”.

The firm’s eureka moment had come two decades previously when an employee, struggling to transport a table in his car, removed the legs

In a statement, Ikea said that, after a short illness, Mr Kamprad had died peacefully on Saturday, surrounded by his loved ones, at his home in Småland, Sweden.

It was there that Mr Kamprad had begun building his empire, a tight ship in which “wasting resources is a personal sin”, he wrote in 1976.

The firm’s eureka moment had come two decades previously when an employee, struggling to transport a table in his car, removed the legs. The flat pack was born, cutting transport and storage costs of furniture by asking customers to lug around and assemble products themselves.

Born in 1926 in southern Sweden, Kamprad’s first business venture, aged five, was buying matches in bulk and selling smaller packets for a healthy margin. He founded Ikea – a name comprising the first initials of his name, his Elmtaryd family farm and hometown of Almhult – in 1943. After five years selling pens, wallets and women’s tights, he started selling furniture in 1948 and the first Ikea store opened a decade later.

His image was tainted in later life by revelations that, during the second World War, he had joined the successor organisation to the Swedish National Socialist Workers’ Party

Mr Kamprad stepped down from day-to-day activities three decades ago after handing over control of the firm to professional managers. Estimates about his personal fortune vary wildly, from $3 to $43 billion. He saved on taxes by moving to Switzerland in 1976, though he returned to Sweden in 2014.

His image was tainted in later life by revelations that, during the second World War, he had joined the successor organisation to the Swedish National Socialist Workers’ Party in occupied Sweden. Mr Kamprad apologised after the revelations went public, describing his membership of the organisation as the “greatest mistake of his life”.

He was married twice, and his second wife died in 2011. He is survived by four children, three of whom are involved in the day-to-day running of their father’s global empire.