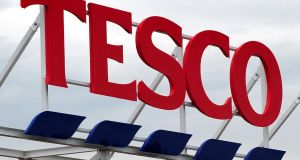 Tesco warned that if the College Green civic plaza plans go ahead as proposed, they could “jeopardise the viability of retailers at this location”. Photograph: Rui Vieira/PA Wire

Dublin City Council’s current plans for a new civic plaza at College Green pose health and safety risks to retail delivery staff, Tesco Ireland has said in a submission to An Bord Pleanála.

The UK-based grocery retailer notes that the current proposals for the plaza mean that the nearest loading bay to its store is roughly 70 metres away. Those loading bays, on Dame Street and Trinity Street, “do not provide appropriate solutions for delivery”, Tesco said.

“Should Tesco Ireland be forced to use these loading bays, there is an increased health and safety risk compared to the existing situation where delivery vehicles can load and unload on the double yellow lines outside the Tesco Express store.

“The health and safety concern is based on the fact that delivery staff would have to roll heavy cages of goods from Dame Street to College Green, including crossing a busy pedestraian/vehicular junction.

“Transporting cages in this way would require a one-way trip of approximately 70 metres, which is a significant increase compared to the current arrangement,” the submission noted.

Tesco warned that if these measures were implemented, it could “jeopardise the viability of retailers at this location”.

In terms of solutions, the retailer proposed that a loading bay on College Green, subject to restrictions, would “adequately address the needs of retailers who generally receive deliveries early in the morning”.

“An appropriate space for deliveries could be provided with restrictions to ensure that vehicles do not use the area throughout the day,” the submission added.

Tesco signed a ten-year lease on its current College Green location in 2013. At that time, it was understood the annual rent for the ground floor and basement was €62,000.

Asked what the company plans to do if the College Green plans go ahead as proposed, a Tesco spokeswoman said: “We are currently reviewing the potential impact the proposed changes could have on our business in particular on our operations and distribution.”

She added that the proposals to Dublin City Council were to “ensure the safety of pedestrians in a busy city centre location” as well as to facilitate “the need for sufficient delivery space in close proximity to our store”.

Tesco isn’t the only objector to the plaza proposals with Dublin Chamber, hotels including the Shelbourne and the Westin, retailers including Arnotts and Brown Thomas, the restaurants association of Ireland and Dublin Bus also opposing the plans.

1 Woodchester founder Craig McKinney dies
2 Brother is dragging his heels as executor of uncle’s will - is there anything I can do?
3 Major credit union plans to limit savings accounts to €40,000
4 Deloitte expands into cloud computing with deal for DNM
5 Passengers face queuing in car parks at Dublin Airport
6 Angela Merkel sweeps in to save the euro zone
7 Inflated GDP data set to cost Ireland in share-out of EU recovery fund
8 Penneys will not reopen on Monday despite expected changes to lockdown rules
9 Tesla’s Elon Musk calls for breakup of Amazon in tweet
10 Revenue tells court it was entitled to raise €1.64bn tax assessment against Perrigo
Real news has value SUBSCRIBE