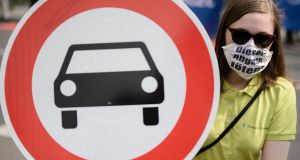 The dieselgate scandal has taken a serious detour to the dark side with news that German car firms carried out tests on humans, which involved them inhaling emissions including noxious nitrogen dioxide.

There’s a battle brewing in Dublin’s bustling pub market as publican Alan Clancy, already boasting a portfolio of popular watering holes that include House, 37 Dawson Street, Xico and 9 Below, has secured the backing of developer Jerry Conlan. Mark Paul reports that the deal will see the two men team up for further Dublin expansion, at a time when several big name groups are already in growth mode.

The dieselgate scandal has taken a serious detour to the dark side with news that German car firms carried out tests on humans, which involved them inhaling emissions including noxious nitrogen dioxide. At the weekend it emerged that tests funded by VW involved pumping exhaust fumes into sealed glass boxes containing monkeys. Now it seems human tests were also carried out in Germany, funded by VW, BMW and Daimler, all in an effort to back up claims about so-called clean diesel.

A listed Canadian diamond mining firm, whose main shareholder is Irish financier Dermot Desmond, is another another listed operation linked to Mr Desmond in a deal worth 176 million Canadian dollars.

Minister for Finance Paschal Donohoe is to update the Cabinet today on whether he will nominate an Irish candidate for the post of ECB vice-president. Irish names linked to the role include Central Bank governor Philip Lane who would be seen as a strong candidate.

Only one in five Irish people believe they can fund retirement to last up to 20 years. That’s the findings of a rather sober report on pension savings by consultants Mercer. The overall message from the results is that we are all very unprepared.

In her media and marketing column, Laura Slattery explains why embracing the smart home is a smart move for broadcasters with brands to preserve.

And in Your Money, as the Tracker scandal only now starts to tackle compensation payments, Fiona Reddan asks whether customers affected should accept the offers from banks or appeal. Meanwhile, Proinsias O’Mahony argues that the bitcoin bubbleis being fuelled by testosterone.