Dublin's southsiders may be getting their very own Ikea 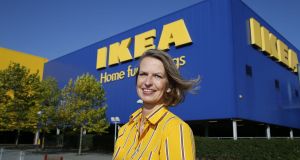 Head of Ikea in Ireland Claudia Marshall: she said the performance of its Ballymun store could be compared to those of New York or Moscow. Photograph: Nick Bradshaw

Swedish home furnishing giant Ikea is exploring the option of an additional site in south Dublin, The Irish Times has learned.

At the request of Ikea, a meeting was held with officials of Dún Laoghaire-Rathdown County Council, at which the company outlined its trading situation in Ireland and the nature of its “order and collect” outlet in Carrickmines, south Dublin.

The retailer also outlined “the fact that they are exploring the option of a site in south Dublin”, a council spokeswoman said.

Council representatives present at the meeting, held on October 23rd, advised the Swedish company that when it had the necessary authority to discuss a specific proposal, “they are welcome to enter preplanning with us”.

Asked about the purpose of the meeting, Ikea said: “Ikea is committed to growing and investing in Ireland. We are always looking for opportunities, and are investigating the potential for a second store in the market, specifically in Cork. However, we have no confirmed plans for the development of an Ikea store at the moment.”

According to returns submitted pursuant to the Regulation of Lobbying Act 2015, the intended result of the meeting with Dún Laoghaire-Rathdown officials, from Ikea’s perspective, was to “understand fully the policy context for such a development, and what the substantive issues from a planning perspective would be”.

In November the Irish Examiner reported the company was scouting a location in Carrigtwohill, east Cork, to set up its second full retail store in the Republic. The first was established in Ballymun, Dublin, in 2009.

Ikea has another outlet in Carrickmines, south Dublin, which opened in September 2016. The 15,000sq ft outlet is an “order and collect” outlet unlike the Ballymun store, which is more than 300,000sq ft – the ninth largest store by turnover in Ikea’s global network of some 400 outlets.

In an interview with this newspaper last October, Claudia Marshall, the Ikea country manager for Ireland, said the Ballymun store’s performance could be compared to stores in big cities such as New York and Moscow.

Sales in Ireland in the financial year to end-August 2017 rose 10 per cent to more than €167 million. Footfall in the period rose by a third to 4 million visits, with 10 per cent of those using the smaller Carrickmines outlet.