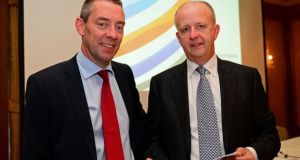 Donal Murphy, the new chief executive of fuels-to-tech conglomerate DCC, said it is on course for a “record” year of spend on acquisitions, as analysts predict it could have a further £700 million to deploy over the next 18 months.

Mr Murphy was speaking after FTSE 100-listed DCCreported interim operating profit up 14.4 per cent in the six months to the end of September, driven by its rapidly-expanding liquefied petroleum gas (LPG) business.

Total spend on deals in the current financial year, based on deals already announced, will amount to £550 million, the company said on Tuesday.

“On conservative assumptions, we think the group has the capacity to deploy at least an additional £700m on (mergers & acquisitions) out to March 2019,” said Davy stockbrokers.

Mr Murphy would not directly endorse Davy’s prediction of its acquistions warchest, but he confirmed it has “plenty of capital” and is looking to buy up other LPG operators in the US, as well as also hunting acquisitons for its healthcare and technology divisions.

The group agreed in April to buy oil giant Shell’s LPG business in Hong Kong and Macau for about £120 million, marking its first foray outside of Europe. Last month, it completed the £235 million purchase of Esso’s retail petrol station network in Norway, while it struck a deal last week to acquire US-based LPG company Retail West for $200 million (€171.6 million).

“Our strategy has been consistent to, nad we have been clear that we will build out our LPG busines son a glbal basis,” said Mr Murphy.

“The US market is fragmented, and we will roll up smaller and some bigger operators there over time. In Asia, we want to learn build out our business, but learn first. We are also keen to deploy capital in our healthcare and tech businesses. We’re committed to diversity.”

The Dublin-based company’s first-half operating profit, excluding exceptional items and a waste business that was sold in May, rose to £122.5 million (€137.5 million) from £107.1 million for the comparable period last year, it said in a statement on Tuesday.

A year of leadership change, where Mr Murphy succeeded long-time chief executive Tommy Breen in July, has also seen DCC expand its key energy business into new markets, while selling its environmental unit, which treats and recycles waste in Britain and Ireland, in May to UK private equity firm Exponent for £219 million.

The energy division, which Mr Murphy previously headed, has been split in recent months into two: LPG as one half, and retail and oil as the other.

Mr Murphy reiterated that the group expects its full financial year to the end of March “will be another year of profit growth and development.”

Group revenues from continuing operations expanded by 17.1 per cent in the period to £6.45 billion, while the company increased its interim dividend by 10 per cent to 40.89p per share.

DCC’s market value has risen almost 20 per cent so far this year on the London Stock Exchange to £6.44 billion, based on its closing price on Monday evening before the first-half results were published.