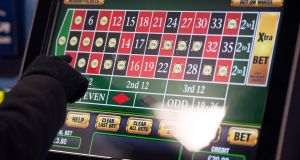 A high-stakes battle between the UK’s biggest bookmakers and anti-gambling campaigners has been triggered after the government announced its intention to crack down on betting machines dubbed by activists as the “crack cocaine” of gambling. Photograph: Daniel Hambury/PA Wire

A high-stakes battle between the UK’s biggest bookmakers and anti-gambling campaigners has been triggered after the government announced its intention to crack down on betting machines dubbed by activists as the “crack cocaine” of gambling.

On Tuesday, ministers released a long-awaited and long-delayed review into the gambling industry which recommends new limits on fixed-odds betting terminals (FOBTs) – machines within betting shops which offer games such as roulette. The devices currently allow punters to place bets of £100 every 20 seconds.

FOBTs provide the largest source of revenues at some retail bookmakers, including Ladbrokes Coral and William Hill, and a significant source of income for groups including Betfred and Paddy Power Betfair. Anti-gambling campaigners and some MPs have argued the machines disproportionately attract addicts — a claim strongly denied by the industry.

It has set out plans for a 12-week consultation to allow interested parties to make their case as to where the government should settle, setting the stage for a final battle between campaigners and companies about how far the curbs should go.

Industry insiders have said there has also been vigorous debate within government over the issue. Prime Minister Theresa May and officials at DCMS have become convinced of the need for strong action, while reports suggest that the chancellor Philip Hammond is concerned about the impact on the Treasury’s tax receipts.

The outcome will have huge ramifications for the gambling industry. In September, analysts at Barclays forecast that Ladbrokes Coral would lose £437m in annual revenues from FOBTs, if the maximum stake was reduced to £2. William Hill would lose £288m, while Paddy Power Betfair would lose £60m

The government also set out other plans to protect vulnerable consumers. It has asked the Gambling Commission to look at whether the “spin speed” on FOBT games such as roulette should be increased from the current 20 seconds per bet.

There will also be a “package of measures taking effect to strengthen protections around online gambling and gambling advertising” to help protect children.

Gambling minister Tracey Crouch said: “Given the strong evidence and public concerns about the risks of high stakes gaming machines on the high street, we are convinced of the need for action”.-Copyright The Financial Times Limited 2017.