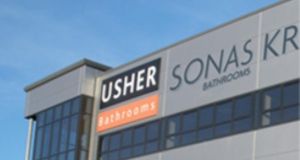 Sonas Bathrooms in Ballycoolin in Dublin. The company has sold a stake in the business to MML Growth Capital Partners Ireland.

Dublin-based Sonas Bathrooms has sold a majority stake in its business to MML Growth Capital Partners Ireland for an undisclosed sum.

Sonas supplies a range of bathroom products through a network of trade resellers around the country, including most retail bathroom showrooms and builders’ merchants. It recorded revenue of about €24 million in 2016.

The value of the deal is believed to be somewhere between €20 million and €30 million.

The deal is subject to approval from the Competition and Consumer Protection Commission. Existing management, led by Dermot Usher and Richard Sloan, will remain with the business but Gerard Usher will step down as a director. He owned just under half of the business.

Neil McGowan who led the deal for MML, said: “MML is focused on backing ambitious Irish-owned SME businesses and Sonas Bathrooms is a classic example. It is the leader in its market, with strong potential, a driven team of people and we are delighted to be partnering with them.”