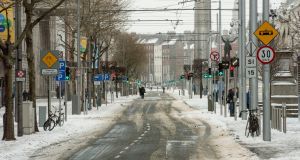 Businesses across the country were forced to close last week as a result of storm Emma. Photograph: Brenda Fitzsimons

Irish businesses reopening on Monday morning were counting the cost of the effect of lost trade last week as a result of storm Emma which lead to widespread closures.

A raft of businesses across Ireland were forced to close from Thursday to Sunday with traders in the east particularly badly effected.

“People say, ‘if you didn’t buy it this week, you’ll buy it next week’, but that tends not to be the case,” he said noting Vintners Federation of Ireland that restaurants were badly hit. The week of storm Emma was a particularly unfortunate one, he said, due to the fact that most workers would have received their February pay cheque in the last two weeks. “A month ago would have been less damaging, even two or three weeks ago would have been less damaging,” he said.

Mr Guiney said provisional estimates of footfall in Dublin’s city centre show it was about half of what it was last year over the course of the full week.

He noted that towns around the country are beginning to open again, but said “people are still struggling on the outskirts of towns to get in”.

Michael Lennon, president of the Irish Hotels Federation, said: “There will be losses shown in this weeks reporting on last week but I would say a lot of those guests will come back.”

For another cohort of businesses, the week had mixed results. “Obviously some parts of the country were hit much worse than others,” said Padraig Cribben, chief executive of the Vintners Federation of Ireland. “Because a lot of people had time off and cabin fever set in some pubs were busy,” he said adding that deliveries from breweries and distilleries were curtailed toward the end of the week.

He agreed with Mr Guiney that “once business is lost, you just don’t get it back”. He added: “You’re into another week and what you do this week won’t compensate for last week.”

One group of professionals that wasn’t particularly badly hit was engineers who were busy ensuring that roads and transport infrastructure were safe and public health infrastructure was usable, according to Engineers Ireland chief executive Caroline Spillane.

“For a lot of our corporate members the business-as-usual piece would have been disrupted but for those involved in critical infrastructure they would have been busy,” she said, noting that last week was engineers week. As part of that week the organisation had more than 800 events planned around the country, some of which had to be cancelled.

Separately, Bank of Ireland said on Monday it had ring fenced a €50 million storm-relief fund to provide support for businesses and homeowners.

“The bank is facilitating emergency working capital at discounted rates...to repair properties as well as providing payment flexibility on other products,” a statement said.

Some of the supports being offered include mortgage breaks for up to three months and payment flexibility on other products.