Ford and VW not stalling on self-driving and electric vehicles 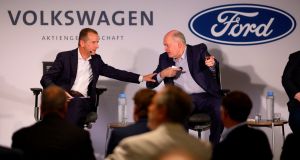 The latest dalliance between Ford and Volkswagen can be viewed from several angles. The two auto giants are cosying up to each other, agreeing to pull together in their efforts to develop self-driving vehicles while also sharing electric vehicle technology.

It could be considered a worrying development for other brands, given the global clout two of the world’s biggest vehicle manufacturers. If these two are sharing expertise and engineering, what hope for the industry’s smaller fry?

From another angle, it seems like a natural fit. Ford is big in the US market, while VW’s strengths are in Europe and China. If Ford is to put a greater focus on pick-ups and commercial vans, it leaves VW to develop smaller vehicles.

Two seismic revolutions are under way in the industry – self-driving tech and electric power – and the development costs behind both are monumental. VW alone is spending €30 billion on rolling out a fleet of new electric cars. The current deal between the two – investing in Ford’s self-driving unit Argo AI, values the business at $7 billion (€6.2 billion). That’s still a drop in the ocean compared to what the rollout of high-level self-driving technology is likely to cost as it moves from the realms of research to commercial reality. Ford officials remain committed to launching autonomous vehicles by 2021, but most privately admit that large-scale commercialisation is still many years away.

Aside from costs, the big hurdle in developing autonomous vehicles is accumulating the data. This can only really be done on the road.

So who is in front on driverless cars?

At present the driverless car in front belongs to Waymo, a division of Google’s parent Waymo. That means the car giants are now competing against some of the biggest of tech giants, with incredibly deep pockets. Against this backdrop, you start to appreciate why so many auto executives reckon its a case of collaborate or die for the traditional car giants.

The VW-Ford deal should mean that its newly financed Argo AI division should be able to give chase to Google’s Waymo. And Argo’s boss, Bryan Salesky, knows what’s under the bonnet at his rival, having been an early leader in Google’s self-driving programme.

Ford and VW executives said the latest collaborations could save hundreds of millions of dollars for each company. But the projects would take time to develop, and the size and timing of the payoffs were unclear. For investors and motorists, it means the car giants aren’t going to let newcomers like Tesla, or the tech giants, run them off the road.