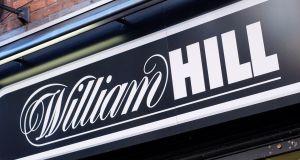 British bookmaker William Hill on Thursday posted slightly higher revenue in the four months since its first-half results, benefiting from higher online gambling demand and its aggressive expansion in the United States.

The company is focusing on its online business in light of new rules which cut the maximum stake allowed to £2 (€2.33) from £100 on high-speed slot machines. William Hill has also closed about 700 shops and is stepping up its push in the US.

In mapping out its online future, the company promoted its digital boss Ulrik Bengtsson to the chief executive role in September.

William Hill reiterated its full-year expectations. It said in August it expects full-year adjusted operating profit to be in the middle of a range of £50 million to £70 million.

Already operating in 10 US states and running a mobile betting app, William Hill on Thursday separately announced the purchase of sports book assets of CG Technology, including its Nevada and Bahamas operations.

Earlier this month, a cross-party group of US lawmakers called for a raft of measures to overhaul online casinos including banning the use of credit cards and limiting maximum stakes in online gambling.

British betting companies have been pivoting to the United States after the US supreme court overturned a federal ban on sports betting. Some companies are even taking big bets with deals of their own, with Flutter Entertainment, formerly known as Paddy Power Betfair, set to combine with Poker Stars owner Stars Group Inc (TSG). – Reuters