Domestic wine sales recover from the crackdown on decadence and corruption 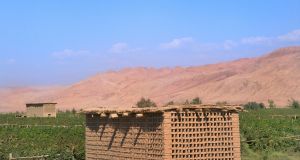 Chinese consumers are shunning domestic offerings from vineyards like this one in favour of imported wine.

China’s largest wine producer is preparing to open a 6 billion yuan (€847 million) “Wine City” in eastern China, an attraction complete with gothic-style châteaux it hopes will help it to navigate the country’s growing but rapidly changing market for the tipple.

Yantai Changyu Pioneer Wines has been ratcheting up production at home as domestic wine sales recover from a crackdown on decadence and corruption.

But Chinese consumers are shunning domestic offerings in favour of imported wine, forcing Changyu and other producers in the country to diversify revenues by snapping up foreign vineyards and building attractions such as “Wine City”.

Domestic companies “have a challenge in that they are trying to come to an understanding of the new wine market in China and how to appeal to consumers who are increasingly leaving domestic wine to drink imported wine,” said Chinese wine expert Fongyee Walker.

In its latest annual report, Changyu said net profit totalled 1 billion yuan from revenues of 4.6 billion yuan in 2015, an increase of 5 per cent from a year earlier.

China broke into the ranks of the world’s top five wine consuming nations in 2011 but a campaign launched in 2012 by president Xi Jinping against lavish government spending and corruption caused the market to shrink for several years in a row. The market began to recover in 2015 and last year wine sales in China expanded by about 7 per cent.

Much of the rebound has been driven by growing Chinese consumer preference for foreign wines. Imported wines accounted for 33 per cent of the 150 million cases of still wine sold in China last year, according to Rabobank, up from less than 20 per cent in 2011.

Changyu has responded not only by accelerating imports – which reached 7 million bottles last year, more than double the previous year – but also by buying up foreign vineyards. “Through these acquisitions we can gain brands and market share overseas . . . and we help these companies increase their sales in China,” Sun Jian, vice-president at Changyu, told the Financial Times, adding that purchases of two vineyards in Australia and Chile would be finalised within a month.

The company’s offshore acquisitions will target wineries with annual turnover of $40 million (€37 million) to $50 million, according to Aldino Marzorati, managing director of Italian liquor company Ilva, a shareholder in Changyu.

In recent years, purchases of châteaux in Bordeaux by wealthy individuals such as Alibaba’s Jack Ma have grabbed headlines. But an increasing number of Chinese wine companies are now following suit.

China’s third-biggest winemaker, Weilong, bought three vineyards in Australia last year as part of a push to invest 600 million yuan in the country.

French and Australian wines account for about 70 per cent of imports to China but Chile and Spain are rising rapidly. “France’s share will continue to decline,” Mr Sun said.

At the company’s Wine City, tourists will soon dine in the two gothic châteaux and will be able to inspect a production line with a daily bottling capacity of 2.1 million, set to open this year.

The company hopes the 1,000-acre project, which was built with the help of Disneyland designers, will be an additional source of revenue for the company during uncertain times.

A 19-storey wine research institute, designed to look like an oak barrel surrounded by champagne flutes, towers over rows of cabernet gernischt vines. Cabernet gernischt is the name given to a red wine grape variety brought to China from Europe in the late 19th century but it was probably originally a misspelling of cabernet gemischt – German for “mixed cabernet”.

1 Explainer: what is the row about SF’s multinational tax plan?
2 Getting out from under ‘never-ending’ Celtic Tiger debt burden
3 Pensions: Estonia plans to unleash a potential €4.85bn on economy
4 Brittany Ferries ends Cork-Santander route
5 Banks withdrawing from ATMs – another failure of regulation
6 Fair Deal nursing homecare leaves little for bills and gifts
7 Election 2020: Parties' pledges on housing simply don’t add up
8 Brittany Ferries announces new services to Spain and France from Rosslare
9 Britain after Brexit will not be alone, but it will be lonelier
10 Concert promoter MCD says dealing with regulators cost €3m
Real news has value SUBSCRIBE