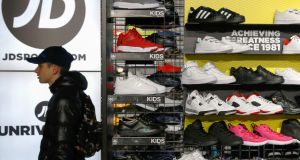 JD Sports, which alongside its core sports retail business runs fashion and outdoor retail outlets such as Scotts and Blacks, said headline profit before tax and exceptional items rose to a record £244.8 million from £157.1 million a year ago.

Shares in the company traded 8.3 per cent firmer at 440.4 pence towards the end of trading having earlier touched a high of 462p. They are up by around a third this year.

Like-for-like store sales at its core sports fashion business rose 10 per cent although the company said it was “unreasonable” to expect growth to be maintained at this level.

The company, which rivals Mike Ashley-owned Sports Direct in Britain, warned that external influences, such as inflationary pressures arising from Brexit, may impact trading in the latter part of the year. – (Reuters)