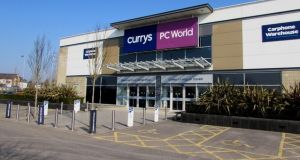 Currys and PC World: posted a pretax loss of €24.8 million, compared to €4.7 million the previous year, despite a €6.2 million gain on currency conversion.

The Irish operations of Currys and PC World took a hit last year from costs related to the merger with Carphone Warehouse.

DSG Ireland Limited reported a sharp rise in pretax losses in the 12 months to the end of April last year despite growth of 2.3 per cent in sales to €155.7 million, according to documents just filed with the Companies Office.

Exceptional items relating to the merger amounted to €19.9 million – largely due to the early termination of leases to accommodate new store formats housing all three brands and associated redundancy costs.

This means the company posted a pretax loss of €24.8 million, compared to €4.7 million the previous year. This was despite a €6.2 million gain on currency conversion.

The directors report cites challenging trading conditions in Ireland as well as property rationalisation costs as reasons for the decision not to pay a dividend to shareholders in the year to April 2016.

The group employed an average of 445 people in the year to end-April 2016 and incurred staff costs of €15.67 million, down slightly on the previous period.

Despite the significant trading loss, DSG Ireland Ltd forecasts – taking account of support by its parent company – that it has “adequate resources to continue in operation for the foreseeable future”.