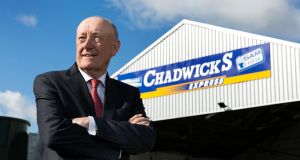 Grafton Merchanting, the owner of the Chadwicks and Heiton Buckley brands, has announced it will create 170 jobs over the next two years. The jobs will result from an expansion of the business, driven by more construction and new homes, according to the company.

Up to 100 of the senior management, specialist sales, operatives and administrative support roles will be created this year with the remainder coming on strea, in 2018.

“We see this as further evidence of a tangible and sustainable turning point for the construction sector in Ireland,” said Eddie Kelly, chief executive of Grafton Merchanting in the Republic.

Speaking on the requirement for new homes in Ireland, Mr Kelly said the company anticipates “a more sustained new homebuilding programme over the coming years, supported by the Government’s help-to-buy scheme and a relaxation of mortgage lending rules”.

Three new branches are being opened in Dublin, including two Chadwicks Express branches in East Wall and Turvey, as well as a Davies outlet in Sallynoggin. The new store openings will increase the Grafton Irish merchanting branch network to 47 shops by the middle of this year, of which 15 will be situated in the Dublin area.