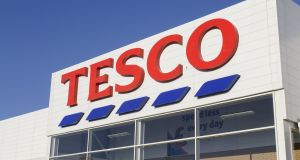 Tesco group said on Wednesday it made an operating profit before exceptional items of £1.28 billion (€1.5 billion) in the year to February 25th, 2017. Photograph: iStock

Tesco sales in Ireland were down 0.1 per cent on last year, according to results on Wednesday.

Performance in Ireland climbed in the first three quarters before falling by 1.3 per cent in the fourth, despite Christmas sales. Revenues in Ireland for the year to February 25th came to €2.48 billion.

Overall, Britain’s biggest retailer beat forecasts for full-year profit, showing its recovery is picking up pace in a boost to chief executive Dave Lewis as he seeks investor backing for his plan to buy wholesaler Booker.

The supermarket group said on Wednesday it made an operating profit before exceptional items of £1.28 billion/€1.5 billion in the year to February 25th, 2017.

Tesco said UK sales at stores open more than a year rose 0.7 per cent in the 13 weeks to February 25th, its fiscal fourth quarter – a fifth straight quarter of underlying growth.

“We are confident that we can build on this strong performance in the year ahead,” said chief executive Dave Lewis.

The supermarket group needs the results to impress to help it persuade shareholders that it can also make a success of its attempt to buy Booker.

Two of its biggest shareholders last month urged it to drop the £3.7 billion bid, saying it was overpaying and the deal was a distraction from its turnaround plan.

Tesco, shares in which have fallen 5 per cent this year, says it remains committed to a deal it believes will provide a new avenue of growth when its recovery is secured.

Lewis said on Wednesday the proposed merger would drive additional value for shareholders from substantial synergies, and would enable Tesco to access the faster growing “out of home” food market.

1 Who are Ireland’s 17 billionaires?
2 My father in a nursing home wants to gift me his house
3 State subsidises public sector retirees to cover gap until State pension
4 Are there annual limits on inheritances or gifts to a child?
5 Swiss police suspect Davos plumbers of being Russian spies
6 Corporate tax change is inevitable, says Donohoe
7 Q&A: Why has the pension age question suddenly become an election issue?
8 Property firm sues engineering company over waterproofing of basement
9 Insolvency arrangement approved for man with €60 million in debts
10 Countries that fail to attract immigrants will lose out – Microsoft chief
Real news has value SUBSCRIBE