Caveat: Denis O’Brien got to hear the impact of the web giants in stereo 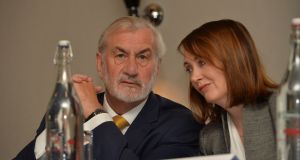 On Wednesday, Independent News & Media (INM) drew the curtains on its final set-piece shareholders’ meeting as a listed company ahead of its €145.6 million takeover by Belgian group Mediahuis. Shortly after it concluded in the Carlton hotel near Dublin airport, INM director Kieran Mulvey strolled across the room shaking hands.

Mulvey is most familiar to the public as the respected former head of the Workplace Relations Commission. He often appeared on late-breaking items in RTÉ Nine O’Clock news reports, standing outside in the dark, giving updates on some attempt to knock together the heads of union leaders and employers to stop a strike. It usually entailed holding meetings deep into the wee hours at his offices, where you can imagine him deploying plenty of tea and sympathy, and perhaps the odd rocket.

At the INM meeting, however, Mulvey fulfilled a very different role as the director nominee of Denis O’Brien, formerly INM’s largest shareholder and latterly a player in the eye-popping series of events that have led to the appointment of High Court inspectors and investigations by the Office of the Director of Corporate Enforcement, the Data Protection Commissioner, and the Central Bank.

Mulvey was appointed long after the alleged events that sparked the multi-headed regulatory and investigative hydra that has consumed INM and made it a kitten-soft target for a takeover. He had no involvement in them, arriving afterwards as part of the clean-up. But as things stand he is now O’Brien’s only representative on the board, and, presumably, speaks regularly with the businessman about ongoing events there.

Mulvey wouldn’t be drawn on O’Brien’s view of the troubles that have afflicted INM and hastened its impending exit from the stock market. He was happy, however, to deploy one of his rockets.

This time it wasn’t aimed at some intransigent union boss or stubborn HR director. Mulvey launched it straight at the giants of the internet, principally Facebook and Google, and in doing so he echoed a theme that has kept O’Brien’s fires burning for at least the last five years.

Mulvey tore into Facebook, Amazon, Google and the other web-based corporate Goliaths for unfairly “hoovering up” advertising revenues from traditional media. He suggested that some of their activities were anti-competitive and lamented their scale: “You’re up against companies that are bigger than most economies in the world.”

The subtext was clear. Mulvey blamed the bullying impact of the web giants for some of the industry pressures that have led to Ireland’s biggest newspaper publisher being sold for the price of a couple of mansions on France’s Cap Ferrat once you strip out the cash on its balance sheet.

The corporate governance mess that started during the chairmanship of one of O’Brien’s previous INM board nominees, Leslie Buckley, has certainly played a role in depressing its share price. You can’t blame Facebook or Google for what INM inflicted upon itself.

That aside, Mulvey is still broadly correct: by dint of their massive scale the web giants have sucked almost all of the oxygen out of the global news publishing business, leaving most of the incumbents on the floor gasping for air.

O’Brien has sounded similar warnings about the web giants for years. Whatever other criticisms you can level at the man, who so often seems to find his companies under the microscope of regulatory scrutiny, he can see clearly what is happening around him.

His business empire has also felt the effects of internet behemoths in stereo.

In one ear O’Brien could hear them trashing the news industry as he lost up to €500 million in his INM foray.

In the other he could hear the screams of the global telecoms sector as companies such as his Digicel group spent fortunes laying communications infrastructure only for data-blitzing web companies to surf down them and suck up all the profits.

Digicel, which used to be O’Brien’s cash cow, is now feeling the strain of a $6.7 billion debt load. In January it agreed a deal to delay repayment of some of its bonds. The web giants, meanwhile, are drowning in lucre. Facebook makes enough profit every three months to pay off Digicel’s entire debt pile. Alphabet, Google’s parent, could do it in two months.

Comes to your party

This is why O’Brien once famously said of Facebook’s founder that “Mark Zuckerberg is like the guy who comes to your party and drinks your champagne, and kisses your girls, and doesn’t bring anything”.

Mulvey’s concurrence with the totality of O’Brien’s grievances against the web giants was apparent in one of his comments on Wednesday: “They’re not even building any infrastructure. They’re piggybacking on most of the infrastructure that we have.”

Again, this is a complaint that O’Brien has made many times, but in the context of his telecoms investments.

Mulvey is the director of a newspaper publishing business. Apart from a few underutilised printing presses off the N7 on the outskirts of Dublin, it doesn’t own any real physical infrastructure.

Five years ago, Talmon Marco, the chief executive of web-based talk app Viber, goaded O’Brien for being “on the wrong side of history”, when he first launched his war to force data-hungry web companies to pay a share of their profits to telecoms investors. It seemed like a slur at the time but since then the issues have intensified.

O’Brien’s Digicel this year hooked up with Turkcell to fight back, using software created by the Turkish group to launch web services for its customers, such as messaging apps and search engines, that ape the most profitable web services. Turkcell’s former chief executive, Kaan Terzioglu, recently joined Digcel’s board.

Whatever difficulties the telecoms sector faces, it will survive because its infrastructure is essential for the web giants’ business models. No broadband, no Facebook.

For the struggling news industry, however, there is no such leverage. Just toil and the fight for survival.

– Andrew Keating, the chief financial officer of Bank of Ireland, is the latest senior Irish banker to head for the hills. The bank announced this week that he will leave by the end of the year. It didn’t say where he will go, but it is expected to be to a company with international operations and outside the financial industry.

In its lament for Keating the bank was quick to refer to the constraints of the €500,000 State-enforced bankers’ salary cap and the effective bonus ban, about which the industry as a whole has been warbling lately.

Keating was paid €468,000 last year, and the impression given was that if only the restrictions were lifted the bank could have stumped up to keep him.

It suited both Keating and the bank to effectively blame his departure on the pay caps. But the reality is also that Keating went for the job when Bank of Ireland was searching for a replacement for its former chief executive Richie Boucher. But he lost out on the role to Francesca McDonagh, who is now his boss.

CFOs who unsuccessfully go for the top job often leave their companies soon afterwards, whether it is banking or any other corporate sectors.

The pay cap presumably played some part in Keating’s decision to quit. But it is unlikely to have been the whole story.

7 Irish whiskey sales near milestone of 12m cases a year