Bumpy ride in prospect for motor trade in 2017 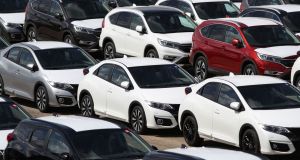 Only 4 per cent of Irish respondents surveyed looking to change their cars this year will actually opt to import. Photograph: Andrew Matthews/PA Wire

Uncertainty is the order of the day in the motor trade. With 39,019 new cars registered last month – 1.7 per cent down on January 2016 – it would seem that sales are holding relatively steady. Yet there are a myriad of potholes ahead, from global economic uncertainty to new technology that may make the latest models seem obsolete within a matter of years.

The most immediate threat, however, remains Brexit and its impact on sterling. Risks range from a likely increase in imports, through to the tariff implications on British-built cars such as the Toyota Avensis or the Nissan Qashqai.

Presenting a review of the motor sector’s performance in Ireland last year – and an outlook for 2017 – economist Jim Power estimated an average exchange rate for this year of 86.33p to the euro.

That’s not as extreme as the tumultuous days of 2009, where the rate touched 98p. But it’s still heady enough to lure buyers across the Border. There is an oft-quoted rule of thumb in the motor trade that above 85p it pays buyers in the Republic to start perusing the showrooms in the North, both as a motorist and as a dealer looking for used stock.

Asked at Wednesday’s briefing if there was any potential opportunity or upside for the Republic’s motor sector from Brexit, nobody seemed to be able to identify any. In short, if you are a motor dealer in a Border county in the Republic, you should probably prepare your business strategy based on a very hard Brexit and a lot of turmoil in the interim.

That will also ease concerns in Revenue, which must be aware of the dent in the tax income due to used imports. Figures quoted in Jim Power’s report on the motor industry estimate the average tax take from a new car at €8,759. For a used import the average is €3,097.

The report says Revenue last year received €1.5 billion from vehicle registration tax and VAT. That’s before the €847 million collected in motor tax or the €3.1 billion in taxes and levies on motor fuel. The Government will be keeping a close eye on the monthly new car sales data for the year ahead. Uncertainty, understandably, doesn’t play well on Merrion St.