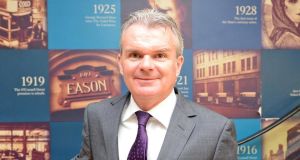 Book sales at Eason stores in the Republic rose 3 per cent by volume over Christmas in a move that “partially offset” the negative impact of weaker sterling on its business.

The books and stationery retailer, which last week said it would expand its footprint with a new outlet in Dublin’s Clare Hall, has a network of 65 stores, including 10 in Northern Ireland.

The impact of Brexit-related currency movements, coupled with deflation in the Republic’s books market, represented a “key challenge” , Eason said in a letter to shareholders. The company said it had “minimised” the effect, however, with volume increases across most core categories.

In the North, like-for-like sales were up 2.7 pere cent. Book sales in the North were up 6 per cent in Christmas trading, while volumes were up 8 per cent.

Sales on the Eason website over the 11 months were up 23 per cent, but competition from UK book-selling websites provided a “significant increase in competition” over the last three months, it reported.

Eason said its franchise division and especially its wholesale arm were most affected by the sterling slump. Wholesale operations were hit by client bookshops returning products, it said.

Despite the sterling and deflation challenges, however, Eason continues to slowly expand its footprint. The business was extensively overhauled and restructured in the last recession.

“Against a backdrop of escalating online competition from the UK, growing volumes is a significant achievement,” said chief executive Conor Whelan.

“The last six months have presented some difficult trading challenges. In particular, the decision on Brexit and the subsequent impact on sterling has resulted in significant pricing volatility. Balancing profitability with competitiveness is a significant challenge and will continue to be so in 2017.”

1 ‘Darth Vader’ masks developed in Ireland can help meat-plant workers
2 ‘Saudi Arabia is where the opportunities will happen in future’
3 Spare me the city-dweller’s longing for a rural idyll
4 Irish company insolvencies expected to spike near crisis level of 1,700 next year
5 Welltel acquires Intellicom in €5.5m deal
6 MSD buys Takeda biologics plant in Dunboyne
7 Over 200 Covid-related complaints lodged with financial ombudsman
8 Ten of the most mysterious aircraft disappearances
9 Vivendi's Messier falls foul of a formidable coalition
10 Consumer spending on the rise but people still staying close to home
Real news has value SUBSCRIBE