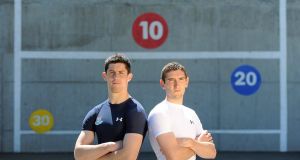 GAA stars Rory O’Carroll of Dublin, and Killian Young of Kerry in Under Armour clothing.

Under Armour tumbled in early US trading after fourth-quarter sales missed analysts’ estimates, reinforcing investors’ doubts that the sports-apparel maker can maintain its rapid growth. Revenue rose 12 per cent to $1.31 billion, the Baltimore-based company said in a statement on Tuesday. Analysts estimated $1.41 billion, on average.

The results support skepticism that Under Amour – which has doubled its sales about every three years – can maintain such a rapid pace of growth.

In October, lower-than-expected annual sales forecasts for this year and 2018 shook investors’ confidence in the company.

That led to a 30 per cent drop in the shares in 2016, the first annual decline in eight years. The stock is the most shorted in the Standard and Poor’s 500 Index, according to data compiled by Bloomberg.