New car sales down 2% as Hyundai holds its lead

39,019 new cars sold in January as motor industry warns of bumpy year ahead 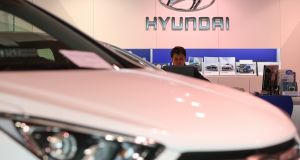 Hyundai was the best-selling new car brand in January, ahead of rivals Toyota, Ford and VW, while Mercedes-Benz pulled ahead of Audi and BMW in the luxury car bracket. Photograph: SeongJoon Cho/Bloomberg

Hyundai was the bestselling brand with 4,598, followed by Toyota on 4,474 and Ford on 4,381. Volkswagen finished fourth with 3,745. The Hyundai Tucson remains the bestselling car in Ireland, with 1,899 registrations, ahead of the Ford Focus with 1,550 and the Ford Fiesta with 1,421. The SUV crossover segment is now the biggest-selling format on the market, according to the latest figures from the Society of the Irish Motor Industry (SIMI).

There was a surprising amount of activity in the last day of trading, with an estimated 5,000 new cars registered on Tuesday.

Amid increasing concern over diesel emissions, petrol cars are making a comeback. While diesel still makes up the majority of new cars – 25,550 registrations – that’s down 7.16 per cent on last year. Petrol sales, meanwhile, rose 3.7 per cent to 11,911.

There has been a rise in electric car sales as well, with 168 registrations last month compared to just 49 in the same period last year. The surge in hybrid sales continued, with 1,390 registrations compared to 662 in January 2016.

Mercedes out in front

At the premium end of the market Mercedes-Benz has taken the lead for the first time in several years, with 1,550 registrations, ahead of Audi with 1,309. Both were significantly ahead of BMW on 740, but the Bavarian brand is still awaiting deliveries of its new 5-Series model, which would impact on sales volumes.

The best-selling premium car was the new Mercedes-Benz E-Class, with 608 registrations.

In the commercial vehicle market – a bellwether for economic activity – 6,394 new vehicles have been registered, down 2.46 per cent on January 2016. Along with general economic uncertainty, new Euro-6 emissions regulations, which came into force last September, have pushed up prices of commercial vehicles by up to 8 per cent.

Speaking at the presentation of SIMI’s Motor Industry Review of 2016 and outlook for 2017, economist Jim Power emphasised that Brexit is by far the biggest challenge to the motor market for the years ahead. “Hard Brexit is most likely and we have to deal with that.”

If no trade deal is agreed and World Trade Organisation rules are applied, cars imported from the UK will incur a 10 per cent charge.

He predicted 142,000 new car registrations for 2017, a fall of 3 per cent on last year. However, he cautioned, “this is definitely the most uncertain period in the last five years.”

The report shows the motor sector continued to generate strong returns for the Exchequer in 2016, with €1.5 billion paid in total Vehicle Registration Tax (VRT) and VAT from new and used car sales, a 26.8 per cent increase on the previous year. That is before the tax income on fuel and motor tax.

SIMI president Alan Greene said: “The motor industry continues to be a strong contributor to employment, with 40,800 people employed throughout Ireland. Last year our industry contributed €1.5 billion to the Exchequer in car sales alone. 2017 was always going to be a more cautious year for businesses, right across the economy, but we have seen a steady start in January and hopefully we are on track for another good year and continuation of a stable market during the rest of the year.”

The report, sponsored by DoneDeal, also said the website had recorded a 9.3 per cent increase in its motoring advertising last year.