Families turn to alcohol, sweets and cheese as source of festive cheer in 2020 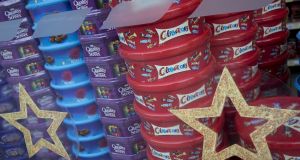 Irish shoppers spent a record €1.2 billion on groceries in December, as a smaller Christmas for many families did not translate into a smaller bill at the checkout. Bumper sales of alcohol, sweets and cheese saw the average spend during the month jump by €134 per family.

Figures from Kantar show that December saw a new monthly sales record, with €1.2 billion in total sales, as families around the country celebrated a smaller-scale Christmas at home.

However, some €1.2 million less was spent on whole turkeys in the four weeks before Christmas with sales soaring for smaller cuts of meat like turkey rolls and roast pork, while sales of sprouts were up by 7.3 per cent. An additional € 6.7 million was spent on chocolate and €3 million more on cheese this year, while alcohol sales rocketed, up by 33 per cent.

“Christmas was certainly different this year, but pared back festivities didn’t stop Irish families from looking for ways to keep spirits high. Even though there was a temporary easing of restrictions on eating and drinking out in December, most of us still turned to the supermarkets to provide some sorely needed festive cheer,” said Emer Healy, retail analyst at Kantar.

December 23rd was the day to avoid shopping, with figures showing that almost half of the Irish population hit the supermarkets on this day. Online grocery shopping was on the rise in December, with some consumers opting to avoid the crush and shop from the safety of their homes. Digital orders accounted for 4.1 per cent of all grocery sales in December, up on 2.8 per cent in December 2019.

“New shoppers continue to make the move online, and we expect digital sales to go from strength to strength in the year ahead,” Ms Healy said.

Lidl was abig winner over Christmas, with alcohol sales rising 70 per cent in the three months running up to the big day, buoyed by its festive offers such as six bottles of wine for €40. Overall, the German low cost supermarket gained 0.9 percentage points of share this period.

Dunnes Stores, with its popular Shop & Save vouchers, managed to hold onto the top spot, with a 22.5 per cent share of the market. Shoppers spent more per trip in Dunnes than in any other retailer, helping the grocer to grow its overall sales by 11.4 per cent.

Tesco and SuperValu are neck and neck for the position of Ireland’s second biggest grocer, with both holding a 22.1 per cent market share this period.

Aldi, which holds an 11.2 per cent share of the market, increased its sales by 16.4 per cent year on year.