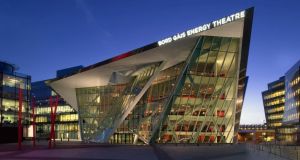 The company that owns the Bord Gáis Energy Theatre in Dublin saw its operating profit more than treble in 2016 following a successful year for the south docklands venue.

Latest accounts for Crownway Entertainment Ltd show that its operating profit increased to €682,120 in 2016 from €197,866 a year earlier.

However, the interest payment noted in the financial statements was purely an accounting obligation. The company received €29.1 million in free shareholder loans in September 2014 to fund the acquisition of the venue, and has received other loans from its owners since then. Financial reporting standards oblige it to account for this as an interest charge.

The accounts state that some €900,000 of the original shareholder loan was repaid last year, with €3.9 million returned in 2015. The company closed the year owing just under €16 million to creditors, including Crownway.

The company’s administrative expenses rose by 6.6 per cent to €5.8 million. This includes the cost of Live Nation’s management contract.

Crownway is owned by Irish couple John and Bernadette Gallagher. Ms Gallagher is also a major shareholder in the Doyle Collection hotel group.

Some 454,000 people attended productions at the theatre in 2016, including stage versions of Billy Elliot, Sister Act, Chitty Chitty Bang Bang and The Commitments.

It is understood that the 2,111-seat venue is having another strong year of trading. Miss Saigon opened last week while the venue staged Hairspray and Blood Brothers during the summer.

The Sound of Music will run over the busy Christmas period.

The theatre was originally built by Irish developer Joe O’Reilly on behalf of the Dublin Docklands Development Authority at a reported cost of €80 million. It was later bought by entrepreneur Harry Crosbie in 2009 and opened in March of the following year with a performance by the Russian State Ballet performing Swan Lake.

It was acquired by Crownway for about €28 million in 2014 having been sold on behalf of Nama.

* This arteicle was amended on Monday, 9th October.