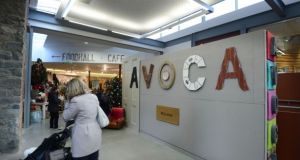 Aramark acquired the Avoca business for a reported €64 million from the Pratt family in 2015.

Food and lifestyle luxuries retailer Avoca has warned of possible redundancies due to the Covid-19 crisis, as some branches including its Dublin city-centre store on Suffolk Street remain closed.

The news comes as staff working for the company had complained of being “left in the dark” as to their future, claiming to have had little to no contact from management to employees who have been furloughed.

In a statement, Avoca told The Irish Times that like many businesses in the retail sector it had been “significantly impacted” by the coronavirus pandemic.

“With continued trading uncertainty and the expectation for long-term effect on the sector, we are taking all steps necessary to protect the business,” a spokeswoman said.

“We are restructuring a number of roles across the business as part of this effort, and, unfortunately, this might result in some redundancies,” she added.

Avoca, which has some 1,000 staff, reopened a number of its 14 cafes and stores at the end of June, but some of its bigger outlets have stayed shuttered, including the Suffolk Street branch and others in Belfast, Letterfrack in Co Galway, Moll’s Gap in Co Kerry and Avoca Village in Co Wicklow, from where the business first emerged. The Belfast outlet is expected to reopen shortly.

Some staff members contacted The Irish Times in recent days to express fears over their jobs, with many concerned that some of the stores and cafes that have reopened may close again.

One employee, who wished to remain anonymous, said employees working at the Suffolk Street store had not been contacted at all in the five months since the branch shut due to the Covid-19 lockdown.

The threat of redundancies came just one day after Brown Thomas and Arnotts announced 150 redundancies due to the coronavirus pandemic.

The company, which holds concessions to run a number of direct provision centres and whose other businesses include Campbell Catering, said the coronavirus pandemic had affected all parts of its operations.

Directors said an unspecified number of employees were currently on the State’s temporary wage subsidy scheme, while the company was being supported by its parent during the pandemic.

Aramark Ireland has reported a €16.2 million pretax loss for its Irish subsidiary for the 12 months ending September 27th, 2019. It attributed the loss to its exit from non-core facilities outside of Ireland, and to continued investment in Avoca.

The New York-listed group acquired the Avoca business for a reported €64 million from the Pratt family in 2015.

Group turnover declined last year to €335.9 million from €351.7 million in 2018, as earnings before interest, taxes, depreciation and amortisation (ebitda) fell to €3.6 million from €4.9 million.

A breakdown of 2019 turnover shows €168 million derived from food service, €82 million through facilities management, €76 million via retail activities and €10.3 million from property management.