Vodafone signs up as lead sponsor of Lions tour 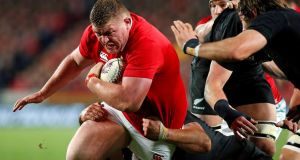 Tadhg Furlong in action for the British and Irish Lions against New Zealand three years ago. Vodafone will be lead sponsor for the 2021 tour to South Africa. Photograph: Nigel Marple/Reuters

Vodafone has signed up as the lead sponsor for the 2021 British and Irish Lions tour of South Africa, giving the telecoms group placement on the front of the Lions’ rugby shirt in a deal that sources in the industry suggest could be between €5.5 million and €6 million.

Both the Irish and British arms of the telecoms group are involved in the deal, the price of which wasn’t disclosed. Under the agreement, Vodafone customers will benefit from exclusive access to experiences and merchandise associated with the tour.

Standard Life Investments sponsored the 2017 tour to New Zealand while HSBC was lead sponsor for the 2013 tour to Australia. It was reported that Standard Life’s sponsorship deal was worth £6.25 million (€6.8 million) while HSBC’s deal was reportedly worth over £4 million.

While the value of the Vodafone deal has not been made public, the upper limit of €6 million which industry sources estimate means it will be worth less than the 2017 deal.

Vodafone’s Irish arm has sponsored the Irish rugby team since 2016 and last year signed an agreement to extend its deal as principal sponsor until 2024.

The company “has had a proud association with Irish rugby since 2016 and we are delighted to further extend our rugby sponsorship to incorporate the British and Irish Lions in 2021”, said Vodafone Ireland chief executive Anne O’Leary.

Warren Gatland, the head coach for the British and Irish Lions, said he was excited to welcome the company as team sponsor. “The key to a successful Lions tour is about players coming together quickly and staying united behind one common goal – to win a test series against the world champions in South Africa.”

The British and Irish Lions tour is scheduled to begin on July 3rd, 2021, in Cape Town and conclude on August 7th in Johannesburg.

Despite Covid-19 related uncertainty, the tour is to go ahead next year as scheduled. Lions managing director Ben Calveley said earlier this month: “An enormous amount of planning, especially from a logistical perspective, goes into putting on a Lions series, so it was crucial that a decision was agreed upon in good time.

“I am particularly pleased that we are able to provide some clarity for all those Lions supporters eager to travel to South Africa next summer.”

1 Two men face fraud charges over £1.2bn sale of Nama’s NI loans
2 Wifi problems? Quick tips to get your home internet out of the slow lane
3 TikTok to invest $500m in data centre and create ‘hundreds of jobs’
4 Microsoft now looking to acquire TikTok’s entire global business
5 Project Eagle: What was it and why is it in the news?
6 So you want to invest in the stock market: what will it cost?
7 AIB defends ‘incredibly’ high €1.2bn loans charge as 2008 haunts
8 Sony Alpha 7S III: An ambitious camera that packs in the tech
9 Stocks decline on poor corporate earnings
10 Hong Kong family backs Central Bank building buy
Real news has value SUBSCRIBE