Delivery group averaged 730,000 per week in May and June 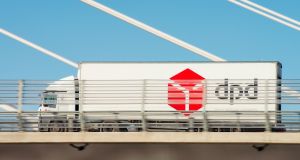 Delivery group DPD Ireland averaged 730,000 parcel deliveries per week at the height of the Republic’s lockdown restrictions in May and June, double what would usually be delivered.

The figures lay bare the effect of lockdown restrictions as consumers moved much of their business online.

But the figures also show that consumers did move back to retail in certain categories when shops reopened. Deliveries of electrical goods and garden items fell when stores reopened.

Meanwhile, as gyms reopened, deliveries of sports equipment dropped but clothes and sportswear volumes were still 45 per cent higher than the same period last year.

Sales for online clothing, however, continued to boom in July compared with previous months, particularly for events. Companies supplying equipment to pubs and restaurants also doubled their deliveries in July while deliveries of interior decoration products rose by 20 per cent.

Dublin and the commuter belt had significant growth in parcel deliveries in May. Outside Dublin city centre, deliveries rose 130 per cent, while in Kildare, deliveries were 112 per cent higher than in May 2019.

DPD Ireland chief executive Des Travers said the change to remote working meant lots of deliveries were going to home addresses rather than workplaces, which may account for some of the volume increases in suburban areas of Dublin and the adjoining counties.

The company is planning on adding depots in Dublin to service the increased demand. “There will be eight depots in Dublin as opposed to six and we will be operating two locations out of Cork,” Mr Travers said.

DPD Ireland is part of the DPD Group, the second largest international parcel delivery network in Europe. The group delivers 1.3 billion parcels to more than 230 countries each day.