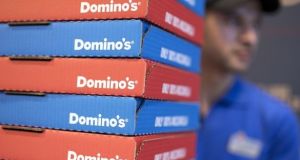 Sales of Domino’s Pizza fell 3.6 per cent in the first half of the year in Ireland as measures designed to slow the spread of coronavirus resulted in a weaker performance.

Group wide, the Domino’s Pizza Group posted a 2.7 per cent dip in first-half operating earnings in the UK and Ireland, hurt by costs for implementing social distancing measures at its restaurants due to the coronavirus outbreak.

The Irish business, which has 54 stores compared to more than 1,100 in the UK and accounts for 5 per cent of system sales, suffered from an earlier lockdown than in Britain and a pronounced impact on consumer spending.

Including “split stores” where one area is covered by two shops, like-for-like sales fell 4.9 per cent. The group said the decline in sales was based on a strong comparative period, with the decision to stop accepting cash payments and the switching off the option to collect also hitting the first half figures. However, Irish stores reopened for collection orders more quickly than the UK, with all stores offering the service by the beginning of July, resulting in an improvement in trade.

“Ireland was also disproportionately impacted by stopping cash payments and, outside of Dublin, by the switch off of collection,” Dominos said in a statement. “When lockdown restrictions eased, we quickly reintroduced collection, including car-side collection, and we have seen an improvement in trading as a result.”

The decision to pause collection orders during the pandemic lockdown resulted in a fall of 87 per cent in collections during the second quarter and a rise in delivery orders of 22 per cent for the group.

In the second quarter of the year, when the lockdown measures were in full force, online sales were up 22 per cent and app sales growth was 26 per cent. – Additional reporting: Reuters

1 Aldi empire wracked by family feud
2 NatWest considers closing Ulster Bank in the Republic
3 Will PTSB be Ulster Bank’s knight in shining armour?
4 EU signals late call on Apple tax appeal as deadline looms
5 NatWest confirms review of Ulster Bank as Covid-19 bites
6 TikTok to be banned from US app stores from Sunday
7 Cliff Taylor: What permanently low interest rates mean for you as a saver or borrower
8 ‘INM 19’ members win High Court applications for document access
9 How Ireland managed to green the White House
10 Gabriel Makhlouf: ‘A full second lockdown would be very serious for the economy’
Real news has value SUBSCRIBE