Service revenue at the company’s Irish business fell 6.7% due largely to Covid-19 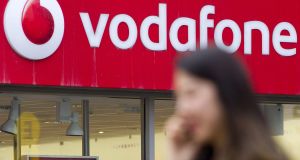 Vodafone Ireland has reported a 6.8 per cent decline in first quarter revenues as its parent announced plans to listits towers business, named Vantage Towers, in Frankfurt in early 2021.

Chief executive Nick Read said the launch of the new towers company was a major step in his strategy of improving the return from Vodafone’s assets.

“Vantage Towers will also unlock further value for shareholders, notably through the IPO targeted for early 2021,” he said on Friday.

Vodafone said it intended to retain a majority stake in Vantage Towers after the listing.

The company announced the creation of a European mast company worth upwards of €18 billion a year ago. The spin-out, which has more than 68,000 mobile towers across nine European markets, became operational in May.

Vodafone will be Vantage Tower’s anchor tenant, providing around 90 per cent of its revenue at launch, and it aims to add other long-term tenants to its infrastructure, Vodafone said.

Vodafone also said on Friday it created Greece’s largest tower company through a deal with Crystal Almond, the controlling shareholder of Greek mobile operator Wind Hellas, which will be added to Vantage.

Crystal Almond has agreed to acquire €100 million of shares in the initial public offering at the IPO price, Vodafone said.

Vodafone also reported a 1.3 per cent decline in first-quarter organic service revenue, which it said was mainly due to Covid-19 impacts. It reiterated its guidance for the year.

The company’s Irish business said service revenue fell from €209 million to €195 million in the three-month period due largely to reduced income from roaming and visitors due to Covid-19 and increased competition.

Vodafone Ireland said its fixed broadband customer based rose 7.5 per cent year-on-year to 289,000 while the overall number of mobile subscribers it has was up 0.5 per cent, with the operator adding 10,000 customers during the quarter.

Mobile data usage increased 23.5 per cent to over 29,353 terabytes, largely as a result of the Covid lockdown.

“As with all businesses, we have reacted and evolved to the changed environment we found ourselves in over the quarter,” said Vodafone Ireland chief executive Anne O’Leary.