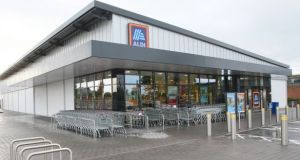 Aldi said sales have risen by 15.2 per cent over the last year with more than 1.4 million households shopping at its stores

German discount retailer Aldi is to recruit 700 full-time employees and a further 350 temporary staff to support its expansion.

The move comes as Aldi announced plans to open four new stores in the coming months at Dunshaughlin, Co Meath, Douglas in Cork, Newbridge, Co Kildare and Bayside in Dublin 13, adding to its existing network of 145.

Additional stores in Cahersiveen and Killarney, both in Co Kerry, are due to open later this year, while planning permission has been lodged for six stores in Castlecomer, Co Kilkenny, Roches Street in Limerick, Ballybrit, Co Galway, Ballyhaunis, Co Mayo, Kanturk, Co Cork and Shannon, Co Clare.

Aldi said it is also focused on doubling its footprint within Dublin where it currenly operates 23 stores.

The company said the new staff are required to help meet ongoing customer demand. It comes on top of the more than 500 additional employees that have been hired since the onset of the coronavirus pandemic.

Aldi said sales have risen by 15.2 per cent over the last year with more than 1.4 million households shopping at its stores.

“Our staff have played a central role in ensuring people have had access to essential best-value groceries in a safe environment. Additional investment for 2021 in new stores, store extensions and Project Fresh store upgrades confirms our continued commitment to the Irish economy,” said Aldi Ireland managing director Niall O’Connor.