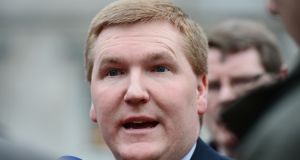 Two of Ireland’s biggest property funds have told investors that they are moving from acquisition to disposal mode as they experience significant withdrawals from investors, writes Jack Horgan Jones.

Another group feeling the pinch are retailers on some of Dublin’s top shopping streets where footfall has slowed dramatically in the aftermath of the Christmas sales. Mark Paul takes a closer look at Grafton Street where hard-pressed retailers and hard-nosed property funds are on collision course.

Business editor Ciarán Hancock sits down with finance minister in waiting Michael McGrath, who explains why he is more than ready to take the financial levers of power should Fianna Fáil come out on top in next week’s general election.

One of the issues on his agenda will be finding funds for housing and the Society of Chartered Surveyors in Ireland 2020 outlook says there is much to do if we are to deliver affordable housing and sufficient supply of rented accommodation.

On the upside, Irish households are considerably better off now that a few years ago, Eoin Burke-Kennedy reports on CSO data that shows households are 80 per cent wealthier than they were at the nadir of the recession. But the figures also highlight the continuing fall in home ownership.

Another group celebrating are the founders and staff at chipmaker Irish Decawave, which has been acquired by US Apple supplier Qorvo in a ¤360 million deal that, Charlie Taylor writes, is believed to be the largest exit to date by an Irish technology company.

Not such good news for staff at Takeda’s state-of-the-art plant in Dunboyne which has been put up for sale. The former Shire biologics plant employs 200 people but the Japanese pharma giant is hopeful of selling it as a going concern.

In his column, John FitzGerald notes that economic good sense tends to be given a back seat when it comes to election campaign promises.

And as Brexit finally leaves the European Union - albeit into the grey world of a transition zone - Mark Paul asks: what have the British ever done for us, eh? Quite a lot it appears.

Finally, residents in Monkstown are objecting to permission being given for Avoca to run a cafe along a strip that is already dominated by popular eateries. Gordon Deegan has the details.

1 Michael Smurfit: ‘I asked Trump to invite me to the White House for my 80th birthday’
2 Small businesses are cannon fodder in zealous anti-virus experiment
3 ‘I’m so lucky to be in the Caribbean – a million miles from Derry Girls’
4 Ryanair expects air fares to fall when flights take off again
5 ‘Never mind GDP; the most fundamental job of any leader is to keep his people alive’
6 Tax and the Pandemic Unemployment Payment: Your questions answered
7 Ireland stands to benefit in a big way from investing in public transport
8 Household savings soar as consumers stop spending
9 Irish business of Carluccio’s restaurants to be wound up
10 Coronavirus: Technopath offers employers not-for-profit antibody tests
Real news has value SUBSCRIBE