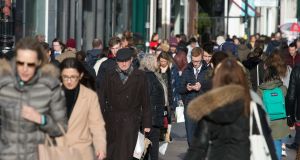 Shoppers on Grafton Street: Footfall on it and Henry Street was down about 9 per cent. Capel Street and Moore Street were the only streets where footfall was up. Photograph: Dave Meehan

The numbers of shoppers on prime streets in Dublin city centre dipped significantly in January when compared to the same time last year, according to the most up-to-date data distributed among retailers.

Dublin Town, an organisation representing city centre businesses, circulated footfall figures among retailers showing the numbers of shoppers on some prime streets were down more than 15 per cent at certain points in January.

The decline in the numbers of shoppers on city streets is caused by structural shifts in the retail market, such as the shift to online shopping, according to industry groups such as Retail Excellence.

Grafton Street, the prime retail location in the State and the 13th most expensive shopping street globally for retail rents, has been one of the streets worst affected. Shop owners in the area gathered at a meeting on Wednesday in Bewley’s Cafe , where concerns over the sudden dip in footfall were discussed.

The Dublin Town figures show that, as soon as the post-Christmas sales period ended, footfall fell sharply in the city. For the week beginning January 6th, overall footfall was down 7.2 per cent across Dublin city centre, compared to the same week last year.

The following week, footfall across the city was down 6.8 per cent, with reductions in 10 of the 13 locations. Footfall was down 13.9 per cent on O’Connell Street, when measured near Eason’s bookstore. Grafton Street was down 16.7 per cent when measured at one end, and 4.7 per cent at the other end.

Last week, the decline tailed off and footfall rose 1.4 per cent across Dublin for the week, compared to the same period last year. For the month so far, however, it was still down 3.3 per cent.

David Fitzsimons, chief executive of Retail Excellence, said that it was clear some of the “hustle and bustle” has gone out of certain Dublin retail streets, despite the booming economy.