Takeda selling off its Dunboyne facility 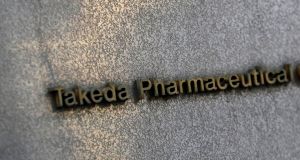 In a statement it said that, “as a result of Takeda’s acquisition of Shire last year, and subsequent integration, Takeda has decided to divest its biologics facility in Dunboyne.”

Japanese pharmaceutical company Takeda has confirmed it is looking for a buyer for its operations in Dunboyne, Co Meath. The plant employs some 200 and Takeda says no redundancies are planned.

In a statement, the company said: “As a result of Takeda’s acquisition of Shire last year, and subsequent integration, Takeda has decided to divest its biologics facility in Dunboyne.”

The plant was the last major investment made by Shire before it was acquired by Takeda for €56 billion last year. The company invested €375 million in setting up a new biologics manufacturing plant on its 120-acre site in Dunboyne. At the time, the company said it planned to employ 400 people when the facility was fully up and running.

However, it appears that employment numbers never topped 200 at the manufacturing facility.

Takeda said it plans to divest the facility as a going concern, with no redundancies intended for the employees on site.

Meath East Fianna Fáil TD Thomas Byrne said he was seriously concerned about the future of the jobs, as Takeda is one of county Meath’s largest employers. “These are highly skilled pharmaceutical jobs that Meath and the northeast region cannot afford to lose.”

“A strategic review of Takeda’s global biologics manufacturing network, initiated following the acquisition of Shire, identified that production capacity at Dunboyne is no longer required,” the company said.

“Takeda has commenced the process of seeking the most suitable buyer and is confident in the successful divestiture of the facility. Dunboyne Biologics is a state-of-the-art, flexible manufacturing facility with leading-edge capability, a highly educated and skilled team, which will be an attractive asset for a future buyer.”

The company said day-to-day operations at the facility will continue “as we complete commissioning and validation of the facility, ready the site for a buyer and prepare our team for the future delivery of products for patients.”

It reiterated that Ireland is a key location within the pharma company’s global network. Takeda also has operations in Baggot Street, Bray, Citywest and Grange Castle.

“The sale of the Dunboyne Biologics facility does not affect Takeda’s other sites in Ireland, which will continue to operate as usual,” the company, which employs 500 people at its other operations in Ireland, said.

Takeda has had a presence in Ireland since 1997 – even before it established an operation in the United States. Initially, it had a manufacturing facility in Bray before building what was its first active pharmaceutical ingredient (API) plant outside Japan at Grange Castle in 2002.

Last year, it opened a €40 million state-of-the-art plant at Grange Castle that will manufacture global supplies of Ninlaro, an oral medicine that is used in combination therapy to treat multiple myeloma, a type of white blood cell cancer.

In a statement the Department of Business, Enterprise and Innovation said: “We have been reassured that the IDA consider this practice of divesting and selling on to a new buyer common practice in the pharmaceutical sector in Ireland.

“This is a state-of-the-art, flexible manufacturing facility with leading-edge capability, and a highly educated and skilled team already in place, which will be an attractive asset for a future buyer.”