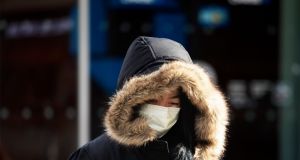 An acute shortage of face masks caused by fear of contagion has found its way west with online retailers, manufacturers and pharmacies in the US and Britain selling out. Photograph: AP Photo/Mark Lennihan

The coronavirus is wreaking havoc within the global technology supply chain, as many Chinese provinces extend the new year holiday in an effort to contain the spread of the disease.

Underlining the concerns for the tech industry, Taiwan’s Hon Hai Precision Industry, which is also known as Foxconn and makes the majority of the world’s iPhones, suffered its biggest share price fall in almost 20 years on Thursday.

Elsewhere, shares of Japanese electronics parts makers and other tech groups with exposure to China were hit hard, with Murata Manufacturing, Tokyo Electron and Sharp all suffering dips of more than 3 per cent as a result of anxieties about disruption to supply chains.

The wobbles came after the governments of six Chinese provinces, including manufacturing hubs crucial for the global technology industry such as Shanghai, Jiangsu, Guangdong and Chongqing, mandated that the return to work after the Lunar new year be delayed by a week to February 10th for all but essential industries.

An acute shortage of face masks caused by fear of contagion has found its way west, with online retailers, manufacturers and pharmacies in the US and Britain selling out of the products in the past week.

Manufacturers are increasing production to meet surging demand as individuals and companies scramble to stock up on protective equipment. US group 3M, which supplies the popular N95 respirator, said this week it has increased production and is “working with distributors to help ensure they have inventory to meet end-user demand”.

SP Services, a UK-based first aid equipment supplier, has experienced two years’ worth of demand in the past week and is looking to source masks from a wider pool of suppliers.

The growing disruption to the world’s second-largest economy comes as China’s health authority said on Thursday that 170 people had died from the coronavirus and nearly 7,800 cases had been confirmed worldwide.

The spread of the virus rippled through global markets with China’s currency weakening past a key level and global stocks under pressure. The offshore renminbi, which trades in major hubs outside mainland China, dropped below seven renminbi to the US dollar for the first time this year. It has tumbled more than 2 per cent since January 20th.

Asian shares sold off around the region, led by a nearly 5 per cent fall for Taiwan’s Taiex index as traders returned from holiday. Foxconn, the world’s largest contract electronics manufacturer, fell 10 per cent, its largest one-day drop in 20 years.

“The coronavirus creates a more uncertain environment than the trade war . . . and the scale of the impact is bigger than Sars,” said Gary Cheung, a director at Haitong Securities in Hong Kong specialising in industrial technology.

Mr Cheung said that the companies hit hardest by the outbreak would likely be those that relied on significant manpower in China – which, in addition to Foxconn, included Pegatron, the Taiwanese contract electronics manufacturer.

Analysts said the most immediate impact would be felt by those with operations in Wuhan, the Chinese city at the centre of the outbreak.

DSCC, a consultancy focused on the display industry supply chain, said China Star was not expected to reopen until mid-March. “Thus, their Q1 2020 shipments are most definitely at risk,” the consultancy said in a research note. – Copyright The Financial Times Limited 2020