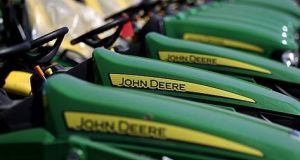 Deere & Co reported a 4% rise in net income in the three months to the beginning of February. Photograph: Getty Images

A relaxation of trade tensions between the US and China spurred an unexpected jump in profits at tractor-maker Deere & Co as farmers’ confidence returned following a trade deal between the countries.

The world’s biggest maker of agricultural equipment, which had suffered from the effects of the trade war between the world’s biggest economies, on Friday reported a 4 per cent rise in net income in the three months to the beginning of February. Analysts forecast a decline.

The results, which sent shares in the group up 7 per cent in pre-market trade, come in the wake of a “phase one” trade deal between the US and China, which followed months of negotiations and calmed to some extent the uneasy relationship between Washington and Beijing.

Among the contents of the deal was a commitment to relax certain barriers that should make it easier for US farmers to export more goods to China. Hopes a deal between the world’s two biggest economies would be struck were a key factor in pushing US stocks to record highs during the final quarter of 2019.

“John Deere’s first-quarter performance reflected early signs of stabilisation in the US farm sector,” said John May, Deere chief executive. “Farmer confidence, though still subdued, has improved due in part to hopes for a relaxation of trade tensions and higher agricultural exports.”

The farming industry had been one of the higher-profile casualties of President Donald Trump’s trade war with China, with Beijing targeting US agricultural imports in retaliation.

Analysts polled by Refinitiv had been expected Deere to report a drop in earnings per share to $1.26 from $1.54 in the same period last year. But EPS rose to $1.63 during the quarter.

Net income of $517 million was up 4 per cent from $498 million previously. Net sales slid 4 per cent to $7.63 billion, but this was less than analysts had expected.

The improved agricultural picture offset a drop off in sales and profit in the group’s construction and forestry division.