Stocktake: Projected US corporate profits rebound may be less healthy than hoped

Companies might be beating estimates but they are not increasing guidance 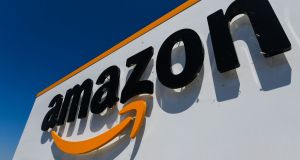 Earnings season in the US is in full swing with Amazon, Facebook and Google parent Alphabet all reporting earnings last week. Photograph: Denis Charlet/AFP/Getty Images

US earnings season is in full swing right now, with Amazon, Facebook and Google parent Alphabet all reporting earnings last week and Apple scheduled to do likewise after the market close today.

For the most part, earnings have been uninspiring but investors aren’t displeased, judging by the fact the S&P 500 closed at new highs again last week. Expectations were low coming into earnings season, with analysts projecting a slight decline in corporate profits. Chief executives (CEOs), too, appeared cautious; according to a Goldman Sachs report that examined the words used by them in earnings and conference call transcripts, CEO sentiment in June hit its lowest level in at least a year, with a “sharp increase in negative mentions” of growth. Nevertheless, CEOs may be “more confident than perceived”, Leuthold Group strategist Jim Paulsen argued in a recent note, pointing to the fact they have been increasing dividend payments at a brisk rate. Thus far, the data suggests Paulsen is right and that companies were playing their usual game of underpromising and overdelivering, beating deliberately low-balled estimates. More than three-quarters of companies have beaten estimates, which is an even higher rate than usual.

Still, there are grounds for caution. For some time, analysts have been predicting a strong profits rebound in the later stages of 2019. However, while companies are beating estimates, they are not increasing guidance. As a result, estimates for third- and fourth-quarter earnings have slipped in recent weeks, suggesting the projected US corporate profits rebound may be less healthy than hoped.

S&P 500 about to double but Europe lags

US markets have been hitting some technical milestones recently, with investors cheering as the Dow Jones Industrial Average breached 27,000 and the S&P 500 took out the 3,000 level for the first time in history. Another milestone lies ahead, notes CNBC’s Michael Santoli, with the S&P 500 now just a few percentage points away from having doubled the peak reached in the previous bull market in October 2007.

Buying at that market peak must have been a source of much regret to investors over the following years; stocks lost 57 per cent of their value during the global financial crisis and investors didn’t get back to the breakeven point until 2013. And while time is gradually healing those wounds, long-term investors certainly haven’t had it easy. Including dividends, stocks have averaged annualised gains of 8 per cent since that 2007 peak, which is below historical averages and arguably insufficient compensation for the pain endured along the way.

Still, European-oriented investors can only look on in envy. While the S&P 500 is on the verge of doubling, the Euro Stoxx 600 remains just below both its 2007 high and its March 2000 high. Right now, the index is approaching the 400 level that has rebuffed it so many times over the last 19 years. Eventually, a breakout will ensue; after two decades of waiting, European investors must be hoping it comes sooner rather than later.

Talking of technical milestones, the Nasdaq 100 crossed above 8,000 for the first time last week. Investors with long memories know it took a long time getting there. The index peaked at 4,816 during the dotcom bubble in March 2000 and then fell 83 per cent before bottoming at 795 in late 2002, notes Pension Partners’ Charlie Bilello. It took almost 17 years to get to 5,000 in early 2017. It has never looked back since that breakout, advancing another 60 per cent over the last 2½ years.

Last week’s high was especially significant in that investors chose to shrug off the regulatory headwinds facing technology stocks. The day after the US department of justice announced a review into the “practices of market-leading online platforms”, the US Federal Trade Commission announced Facebook would pay a record-breaking $5 billion (€4.5 billion) fine to settle an investigation into its privacy practices. Nevertheless, Facebook shares hit new highs for 2019 as the company beat analyst earnings estimates. Tech earnings have been strong during earnings season; right now, the healthy profits outlook is trumping any regulatory concerns.

Although US indices have led the world higher in 2019, not all stocks have been partying. The small-cap Russell 2000 index remains 10 per cent below its 2018 high and some investors worry that this is indicative of underlying economic weakness. Small-cap weakness certainly should not be ignored, says Jason Goepfert of Sundial Capital Research. Over the past 30 days, there have been six sessions where the large-cap S&P 500 was at or near 52-week highs but the ratio of the Russell 2000 index to the S&P sunk to a 52-week lows. That’s the highest cluster of days since 1999, says Goepfert, who warns such trends “have almost universally preceded trouble in the broader market, very roughly preceding the declines in 1987, 1990, 2000, 2007, and 2015”.

1 Irish company paid €1.2m a year by collapsed Blumenthal-linked Australian restaurant
2 Why bosses should not be afraid of speaking out on Instagram
3 Should AIB compensate me for upsetting letter on arrears?
4 Hugo MacNeill steps back from Goldman Sachs role
5 Greencoat Renewables buys Clare wind farm for €35.4m
6 ‘I wouldn’t be a big saver. I tend to buy now and repent at leisure!’
7 Irish economy to grow by 3.4% this year, predicts EY
8 ‘Germans are very efficient and reliable. Cancelling is alien to them’
9 Hammerson appoints lead for move into housing
10 Legal eagles yet to land; economy to grow 3.4% this year; and CEOs on social media
Real news has value SUBSCRIBE
Save money on international transfers