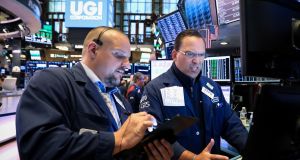 Global stocks keep making new highs, even as falling bond yields indicate things may be getting trickier for the global economy. What gives? Stocks often party during tough economic periods, but that’s not necessarily what’s going on right now, according to Société Générale’s Andrew Lapthorne. Rather, the world’s biggest companies are doing all the heavy lifting.

These $100 billion mega-caps are “powering ahead”, but global companies with sub-$5 billion valuations are “still struggling” to make back losses sustained last year. Measured in dollars, about two-thirds of global stocks are lower over the last 18 months.

Small-cap stocks with capitalisations of $1 billion or less are finding things especially tough, with the median company losing 10 per cent of its value this year. Large-cap US and global indices are not a good barometer of global prosperity, says Lapthorne. There are thousands of other companies “that are not doing so well”.

US expansion is longest in history

The United States is now in its longest economic expansion in history, breaking the 120-month record that ended following in 2001. The long bull market that has accompanied the expansion means some investors are nervy we are witnessing a late-cycle rally that will be killed off by a recession sooner rather than later.

But the expansion isn’t really that old, says LPL Research’s Ryan Detrick, who notes that many countries – including Ireland – have experienced growth for 15 years or more (Australia hasn’t had a recession for nearly 28 years). Furthermore, US GDP has only grown by 25 per cent over the last decade, far below previous expansions. Still, while the US economy may continue to expand, it’s fair to say the next decade won’t be nearly as kind to equity investors. Ritholtz Wealth Management’s Michael Batnick notes stocks have delivered annualised returns of 12 per cent over the last decade, better than 90 per cent of prior periods. There have been 342 new highs during that time, the most of any 10-year period.

Nor have investors had to sweat for those returns. The average drawdown over the last 10 years was just 1.7 per cent, the lowest reading going back to 1950.

Almost every market dip has been a false alarm; of the 167 drawdowns over the last decade, only 3 per cent reached correction territory. Batnick offers up a bunch of other stats showing that whatever way you look at it, US investors have had things abnormally easy over the last decade. In fact, you can easily make the argument that this has been “the best 10 period ever for US stocks”, says Batnick. “Can this bull market continue?”, he asks. Yes. “But is it likely to be as strong as it was over the last 10 years? No, almost certainly not”.

Pace of stock gains may slow

The first half of 2019 has been a very fine one indeed for investors. The S&P 500 enjoyed its best first half since 1997, gaining 17 per cent following the best June since 1955. Does that suggest stocks may tire in the second half of the year or does momentum beget momentum in such cases? Big first-half gains tended to be followed by more of the same during the go-go 1990s, says LPL Research, but some weakness is common if you look back further in time. On average, not only is performance below average for the rest of the year, pullbacks tend to be bigger than normal.

“This great start to 2019 was nice for investors,” says LPL, “but the second half of the year could be a bumpy ride.”

Earnings season likely to be uninspiring

US earnings season is about to kick off and it’s likely to be a forgettable quarter for corporate profits. More than 80 per cent of S&P 500 companies that have revised earnings estimates in the run-up to reporting have cut them.

Negative pre-announcements always outweigh their positive counterparts prior to earnings, but not usually by this much; according to FactSet, only once since 2006 have more companies issued negative guidance.

Analysts have also been busy downgrading estimates, cutting forecasts on 166 more stocks than they upgraded them for in June – the worst monthly reading in almost two years, according to Sundial Capital Research. Currently, estimates suggest profits will be slightly down on this time last year.

In reality, most companies will beat estimates – not for nothing is earnings season often dubbed cheating season, with companies invariably beating deliberately lowballed estimates. As a result, companies are likely to post a minor increase in profits. Nevertheless, expect an uninspiring corporate quarter. Stocks may be at all-time highs but it’s in spite of earnings rather than because of them.