Stock take: Breaking the rules and living on hope

Some market jitters ahead would not be surprising 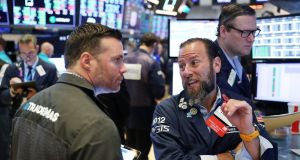 Ordinary investors are committing a multitude of investment sins, judging by a recent Schroders survey that polled over 25,000 people from 32 countries. The survey, which polled people investing at least €10,000 in the next 12 months, found investors are far too active; on average, they stay invested in a product for 2.6 years (advisers generally recommend you stay invested for at least five years). The vast majority – 77 per cent – check their portfolios at least once a month (not a good idea, as research indicates the more you check, the worse your results).

Respondents got spooked when markets went south in late 2018, with only 18 per cent sticking to their initial investment plan. And investors appear are to be pretty optimistic about future returns: on average, they expect annualised returns of 10.3 per cent over the next five years, with one in six expecting annual returns exceeding 20 per cent.

Notably, investors said they would like to enjoy annual returns of 10.7 per cent over the next five years. In other words, they expect to get almost exactly what they want to get. Good luck with that.

The S&P 500 is up almost 20 per cent in 2019 and made history last week by crossing 3,000 for the first time, but a closer look at the market action shows this is no raging bull market. Data from Pension Partners’ Charlie Bilello shows stocks continued to race higher after the index first breached 2,500 in 2017. Within 67 days, the S&P had crossed 2,600; 2,700 tumbled 43 days later; and it took just 13 days for the index to hit 2,800. Thereafter, things slowed down. It took 224 days to go from 2,800 to 2,900 and 316 days to go from 2,900 to 3,000. As a result, the S&P 500 has only gained around 5 per cent since late January 2018. These round number milestones don’t really matter, of course. Still, the fact the S&P 500 has only gained around 5 per cent over the last 18 months is worth noting. It could be interpreted as a tiring rally, although it’s more common for bull markets to go out in a blaze of glory. That suggests stocks have finally broken out of a long consolidation period and have room to keep rising.

Investors not convinced by new highs

Investors certainly aren’t breaking out the champagne now that the S&P 500 and the Dow Jones Industrial Average have crossed 3,000 and 27,000 respectively. Bullish sentiment, as measured by the weekly American Association of Individual Investors polls, is at its highest level since May but is “still fairly subdued by historical standards”, says Bespoke Investment, which notes that today’s sentiment reading is lower than 86 per cent of past polls taken when stocks were at all-time highs.

Indeed, until recently, AAII bears outnumbered bulls for seven consecutive weeks – the first time that has happened since the major market bottom in February 2016. Usually, investors get excited when stocks are hitting new highs, but that hasn’t happened in 2019, which many strategists have dubbed a flowless rally. Continuing that trend, Investment Company Institute data shows more than $28 billion was pulled from US equity funds in the same week that indices hit new highs – the biggest outflows in more than five years. Clearly, many investors are unconvinced by this bull market. They may be right – corporate earnings look lacklustre and US recession risk is rising. However, low expectations suggests any kind of upside surprises could see cautious investors put their money to work, driving indices higher.

A rising risk of a market pullback?

While muted sentiment suggests there’s plenty life left in the bull market, LPL Research strategist Ryan Detrick says investors shouldn’t be surprised if stocks suffer a painful pullback in coming months. The S&P 500 suffered five separate 5 per cent pullbacks in 2018 and fell almost 20 per cent in the closing stages of the year. For all the hullabaloo that accompanied the market downturn in May, when stocks tumbled 7 per cent, 2019 has been comparatively calm. That has been the only pullback of note, says Detrick, who notes that indices endure three pullbacks in an average year. Furthermore, strong gains in the first half of 2019 indicate some pain may be ahead. It’s not that the outlook is bad – looking at the 20 previous occasions where the S&P 500 gained at least 10 per cent in the first half of the year, Detrick found stocks enjoyed average gains of 7.5 per cent in the second half of the year. However, the bigger the first-half gains, the greater the chance of a sizeable pullback. In the past, when markets are as stretched as they are now, stocks suffered average corrections of 12 per cent. In short, stocks aren’t meant to go up in a straight line, so some market jitters would not be surprising.

1 Angela Merkel sweeps in to save the euro zone
2 In six months we will be in the grip of a 1980s-style recession
3 Don’t expect a bonanza for Ireland from the EU’s €750bn recovery cash
4 What will it take to reopen the world to travel?
5 Property price drop of up to 12% this year a ‘reasonable’ assumption – McDonagh
6 Perrigo tells court of ‘very high level of unfairness’ in €1.64bn Irish tax bill
7 Cork-based AI supply chain company Keelvar raises $18m
8 Chartered Land moves closer to approval for Dublin’s tallest tower
9 Emirates to restart flights from Dublin to Dubai this month
10 Cycling made easier with an Irish-made electric bike
Real news has value SUBSCRIBE
Save money on international transfers