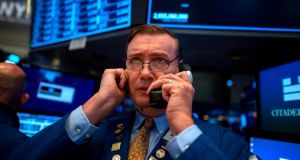 Despite increased recession concern and flat to negative corporate earnings and revenues, the S&P 500 enjoyed its best first half to a year since 1998. Photograph: Johannes Eisele/AFP/Getty Images

Recession talk continues to grow louder but stock markets keep hitting new highs. Are the warnings over-hyped or is a 2020 recession a real possibility that poses a threat to stocks?

It’s clear a growing body of serious observers are increasingly concerned. In June, a record number of respondents to Bank of America Merrill Lynch’s monthly fund manager survey said the global economy is in its late-cycle stages.

According to a more recent survey by London-based Absolute Strategy Research of more than 200 institutions controlling a combined $4 trillion of assets, there is a 45 per cent chance of a global recession in the next 12 months – the highest since the survey began in 2014.

A Goldman Sachs survey of 307 finance professionals from the insurance industry found 82 per cent expect a US recession in 2020 or 2021. A US recession was the biggest concern of 35 per cent of respondents, a big increase on the 24 per cent figure recorded the previous year.

Chief financial officers (CFOs), too, are worried. Almost half – 48 per cent – of American CFOs are predicting a US recession by mid-2020 and more than two-thirds (69 per cent) expect a downturn to have begun by the end of next year, according to Duke University’s widely-followed quarterly CFO Global Business Outlook survey.

This marks the third consecutive quarter in which CFOs predicted a 2020 recession. The survey, which polled more than 500 CFOs around the world, found CFOs outside the US are even more pessimistic about the economic outlook for their own countries.

Researchers at the Federal Reserve, too, are cautious. According to the New York Federal Reserve’s recession probability index, there is a 33 per cent chance of a recession in the next 12 months.

An optimist might shrug that off and say there is a 67 per cent chance a recession will not ensue, but history suggests it’s not that simple. The nature of the model means there has not been a reading in excess of 50 per cent since 1982, notes DataTrek Research, not even during the global financial crisis in 2008.

It did so in July 2001, which DataTrek describes as “better late than never” (stocks had peaked over a year earlier while the US had fallen into recession in March 2001). And it was “spot on” in 1990, breaching the 30 per cent level in June – one month before the 1990 recession began.

In fact, since 1960, a recession has followed every time the Fed’s probability index crossed the 30 per cent level. A 2020 recession is no “fait accompli”, says DataTrek, but the historical accuracy of the index means there is “certainly enough here to cause concern”. The Fed’s recession indicator is partly based on US bond yields.

Typically, the yield on long-term bonds is higher than short-term bonds, thus rewarding investors for the risk of waiting longer to get paid. Occasionally, an inverted yield curve occurs, with short-term rates exceeding long-term rates. A yield curve inversion is generally regarded as the most reliable recession indicator – it has preceded every US recession since 1960 – so there was much concern in March when the dreaded inversion occurred.

Duke University finance professor Campbell Harvey, the researcher who discovered the yield curve’s predictive ability in his 1986 dissertation, is concerned.

A brief inversion is not cause for serious concern, says Harvey, whose research indicates an inversion must last for three months for it to be considered an authentic recession signal. Unfortunately for investors, the yield curve triggered an official recession forecast at the end of June, having remained inverted for a full quarter.

Harvey, who is also a researcher associate at the National Bureau of Economic Research, the body tasked with providing the official start and end date of US recessions, describes the yield curve as “an indicator of sentiment about the future of the economy and the risks we face”. He points out that not only has his model predicted the last seven recessions, it has never given off a false signal.

Nor is he comforted by the fact the US economy is still growing and unemployment is at 50-year lows, saying these are lagging indicators while the yield curve “provides a window into the future”.

The fact that an inverted yield curve is now a widely-followed recession indicator means it may now be a causal factor, he adds, with companies viewing an inversion as a reason to potentially cut back on investment and hiring, thus contributing to a slowdown.

There are other danger signs, says Harvey, such as “anti-growth” developments (global trade tensions and Brexit), increased economic uncertainty (at 121 months, the US economic expansion is now the longest in history and is “feeling old”, with many “questioning the robustness of future growth”).

Then there is the aforementioned CFO survey. “CFOs know the capital spending and employment plans before the plans are executed,” says Harvey, noting the survey has an “excellent track record” over its 25-year history. The fact that CFOs outside the US are even more pessimistic is especially concerning for Harvey. “For the first time in a decade,” he says, “no region of the world appears to be on solid enough economic footing to be the engine that pulls the global economy upward.”

Overall, Harvey’s model indicates a slowdown is coming in 2020 and possibly 2021, with the ideal situation being one where “growth slows and we dodge an official recession – or the recession is mild”.

Nevertheless, despite increased recession concern and flat to negative corporate earnings and revenues, the S&P 500 enjoyed its best first half to a year since 1998 and has hit multiple all-time highs. “If the bond market is really telling us something,” asks Absolute Strategy Research’s David Bowers, “at what point will the equity market wake up?”

David Rosenberg, a long-term bear, goes further, saying the stock market “ceased to be an economic indicator a long time ago” and is now “an asset class that has become addicted to policy stimulus”. He points to May’s “woeful” unemployment report, which was greeted by big stock market gains as investors anticipated rate cuts to ward off economic weakness.

Rosenberg’s criticism may be simplistic, however. A 2005 paper, The Stock Market’s Reaction to Unemployment News: Why Bad News is Usually Good for Stocks, notes unexpectedly bad unemployment news typically causes stocks to fall when investors’ main concern is a recession.

During expansions, however, investors tend to cheer bad news as it increases the odds of rate cuts. Right now, investors are betting Federal Reserve rate cuts will avert the recession threat.

If they’re right, then stocks can keep rising. Since 1971, says Fundstrat strategist Thomas Lee, the first rate cut in a cycle has always been followed by gains when the economy has not been in a recession.

If a recession does ensue, however, then soaring stock markets risk coming back down to earth.