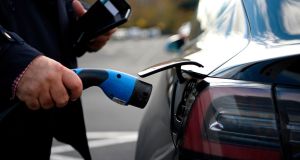 Tesla has gained almost 500 per cent in 2020. Photograph: Daniel Leal-Olivas/AFP via Getty Images

A normal stock often enjoys a minor price pop when it’s announced that it is about to be added to an index. Tesla, however, is not a normal stock so no one blinked an eye when the electric-car maker soared 25 per cent last week following the announcement it is to be added to the S&P 500.

Nevertheless, gaining some $100 billion in market capitalisation on the basis of index inclusion is extraordinary. Even more extraordinary are the efforts made by some to justify Tesla’s $470 billion valuation. Morgan Stanley turned bullish on the stock last week for the first time since 2017, (a little late given Tesla has gained almost 500 per cent in 2020 alone), by heroically estimating what Tesla might be earning in – wait for it – 2030.

Who knows, maybe Tesla will be earning gazillions in 2030. But will the stock outperform over that period? Unlikely – even if Tesla does prove to be a great company, that doesn’t mean it will be a great stock.