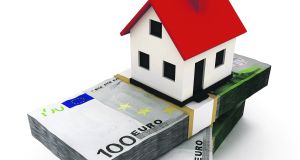 Many banks stopped offering exceptions to the Central Bank’s lending rules, which allow people to borrow more than 3.5 times income, or to buy a home with less than a 10 per cent deposit.

The Central Bank has written to the chief executives of mortgage lenders in Ireland reprimanding them for not dealing with their customers in an appropriate manner when they tightened lending policies in the wake of the Covid-19 pandemic.

In the letter, Helena Mitchell, head of consumer protection, criticised some lenders for not sufficiently considering the impact of changes they have made to their mortgage application process on customers who were already in the process, noting that some lenders “have not managed communications with these customers in a proactive and consumer-centric way”.

Banks moved rapidly to clamp down on mortgage lending in the wake of Covid-19. Many stopped offering exceptions to the Central Bank’s lending rules, which allow people to borrow more than 3.5 times income, or to buy a home with less than a 10 per cent deposit.

Others refused to lend to those who were receiving either the Pandemic Unemployment Benefit, or benefiting from the Temporary Wage Subsidy Scheme. Others still tightened their lending criteria banning lending to certain sectors; one reader of this newspaper for example, found their mortgage application was turned down by EBS simply because they worked for an airline.

It meant that many people who had previously received mortgage approval, were suddenly at risk of getting their mortgage turned down.

As Martina Hennessy, managing director of mortgage platform Doddl.ie, notes, banks are now looking for confirmation of income etc at several stages during the underwriting process such as loan offer and drawdown.

This means that borrowers need to be upfront – and aware – of any change to their financial circumstances. According to Ms Hennessy, the Employment Wage Subsidy Scheme (TWSS replacement) is not indicated on an employee’s payslip, so some potential home buyers may not be aware they are on it.

“Their net income hasn’t changed, and it’s not on their pay slip, so people don’t realise it,” she says.

But, many lenders now require applicants to get a letter from their employer confirming that they are not on the EWSS (TWSS replacement), so this could become an issue down the line.

Such requirements are not always clear at the outset of the process however, and the regulator now wants lenders to make clear to customers that where there is any significant change to their circumstances prior to the drawdown of the loan, the offer may subsequently be withdrawn, paused or varied.

“At a minimum, this communication must be included in the loan offer letter,” Ms Mitchell wrote.

There are signs however, that lenders are beginning to loosen their approaches once more. According to Ms Hennessy, there is an expectation that exceptions will return in January, with some lenders now offering them on a case-by-case basis since October, while lenders are also starting to factor in bonuses and variable income, such as rental income, again into income multiples.

Ms Hennessy is also urging putative home buyers to safeguard their interests by ensuring their solicitor includes a “subject to loan approval” clause in their contract.

This clause allows purchasers to back out of a contract without penalty on the grounds that they couldn’t secure mortgage finance.

Otherwise, once you sign a contract, if you have to renege on it because of a lack of funding – and given the uncertainty this is still a possibility – you are liable to lose your deposit.

“It’s your get out of jail clause,” she advises.

1 Basic income for all: Has the Covid crisis given us a new economic model?
2 Direct sea routes to Europe offer certainty in choppy Brexit waters
3 ‘I don’t need to do any of this. . .I don’t actually need to work.’
4 Online shoppers face unwelcome tax surprise
5 Promontoria barred from pursuing doctor over Ulster Bank loan
6 Only way is up for Stripe as valuation skyrockets
7 Unilever’s Dutch and British arms merge after 90 years ahead of Brexit
8 ‘Make plans but don’t hold on to them too seriously’
9 Anti-alcohol zeal of public health experts peppers reopening debate
10 A tale of two pandemics for Smurfit Kappa and Greencore
Real news has value SUBSCRIBE
Save money on international transfers