Household wealth at all-time high with each Irish adult worth €166,051 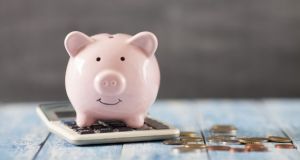 This is the highest level of wealth ever recorded by the Central Bank, and is 12 per cent higher than the boom-time peak of €723 billion reached in the second quarter of 2007.

Pandemic or not, the wealth of the Irish reached a new high in the second quarter of the year, as households saved more and cut down on debt. It means that on a per capita basis, Irish adults, on average, have wealth of € 166,051. However, while households appear to be weathering the Covid-19 storm, the Exchequer is bearing the brunt of supporting them, with government debt also at an all-time high of €252 billion.

According to new figures from the Central Bank, Irish household wealth rose to a record high of €817 billion in the second quarter of 2020, buoyed by solid property prices, inflows to deposits, a rise in value in insurance and pension schemes, and declining personal borrowings.

This is the highest level of wealth ever recorded by the Central Bank, and is 12 per cent higher than the boom-time peak of €723 billion reached in the second quarter of 2007. The figure is up by 2.9 per cent, or €23 billion, on the first quarter of the year, with savings again on the increase.

“Overall, household savings have increased during Q2 2020, as the effects of Covid-19 limited the spending opportunities for the sector,” the Central Bank said.

Outstanding debt fell again, down to €131 billion, the lowest figure since the second quarter of 2005 Irish household debt peaked at €202 billion in 2008, and has since fallen by €72 billion, or 36 per cent.

This means that as a proportion of disposable income, household debt has fallen again, down by 2 percentage points, to stand at 107 per cent. According to the Central Bank, the decline was driven by an increase in household disposable income over the quarter, in addition to the decrease in debt.

The latest decline means that Ireland is behind countries such as Denmark (211 per cent), the Netherlands (192 per cent) and the UK (123 per cent) but ahead of the Euro area 19 average (95 per cent).

In an era of economic uncertainty, wage supplements and pandemic payments, it is clear that the rising tide will not have lifted all boats, and the Central Bank alludes to this. It says that the figures “may not reflect underlying experiences of individual households or describe the distribution of wealth”.

It does note however, that despite rising unemployment, the imposition of subsidies, combined with a fall in spending, has lessened the impact of this on household incomes.

The figures also show the burden Covid-19 and the various lockdowns and restrictions have had on the public finances, with some €14.3 billion of Government borrowing alone in the second quarter.

The hike in Covid-19 related borrowing means that outstanding Government debt is now of the order of €252 billion, a record high.

However, Government net financial worth remained steady this quarter, with a rise of € 632 million in the second quarter due to an increase in financial assets of € 11.5 billion, offsetting the rise in government debt and other financial liabilities.