Why am I paying Irish tax on income already taxed in Canada? 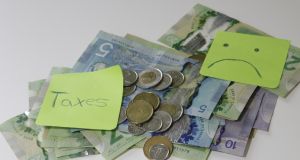 It might be worth your while securing specialist advice from a tax adviser familiar with the Canadian tax code. Photograph: iStock

I’m a Canadian, I own my company (partner at 50 per cent) in Canada. I receive a wage every month for this company into my Canadian account. I send this money every month to my Irish bank account. From the Canadian law, I declare this wage in Canada and Quebec.

When it comes to filing taxes in Ireland, I understand I have to declare this Canadian revenue and under the double taxation treaty, I have credits on this.

I think you have answered your own question in the last line there.

Double taxation agreements are very useful things for people like yourself who have business interests, assets or income in more than one jurisdiction. Without them, you would be getting taxed in isolation according to the rules of the individual states. And, quite often, that could lead to a situation where you are taxed twice on the same income.

Ireland has a network of such agreements with 73 countries around the world. Another one is awaiting ratification, and negotiations have reportedly concluded on a further four. In relation to Canada, the two countries have had double taxation accords going back to 1966. The most recent agreement was concluded in 2003.

There tends to be a broad template for these though they are not identical. Depending on the countries involved, the taxes covered and the circumstances in how they are covered can vary. Personal circumstances also affect how a person or an entity is treated under such an agreement.

From what you say, you are tax resident in Ireland. However, it appears that you consider your domicile – in very simplistic terms, your home country – to be Canada.

This matters. If you were domiciled in Ireland, you would be liable to Irish income tax on your worldwide income, including the wage you are paid from the Canadian business.

If, however, you are resident for tax in Ireland but domiciled in Canada, you are liable for income tax only on your Irish earnings and, crucially, any foreign earnings that you remit to Ireland.

By transferring the earnings from your Canadian business to your Irish bank account, you are remitting the money here. That makes it taxable in Ireland. If you left it in the Canadian account, it would not be subject to Irish tax.

Anyway, assuming that does not apply from what you say, it brings us back to double taxation agreements. Essentially these operate by granting you a credit against tax paid in another jurisdiction.

And that is precisely what is happening here.

As an Irish tax resident, you are liable to Irish income tax and, as a sole trader, you file an annual tax return. You’d have to do this return in any case as you have taxable income from non-PAYE sources anyway – the money you are transferring from Canada to the Irish bank account.

USC and PRSI also apply but we’ll leave them to one side here.

Because you transfer the Canadian income over here, it becomes liable to those rates.

However, the Canadian income is also subject to tax in Canada. Fortunately, I don’t have to go into tax rates and bands over there because there are many more of them and, as you say, there are both federal and state income taxes. Anyway, you say that, in total, this Canadian income is taxed at about 30 per cent over there.

As that is below the income tax rates here, where you are resident, you face the additional tax charge of about 10 per cent here, clearly because the total income subject to Irish tax brings you into the 40 per cent income tax bracket.

It is only 10 per cent because the double taxation agreement between Ireland and Canada gives you credit for the 30 per cent tax charge on that income already deducted in Canada.

So you are simply paying the 40 per cent any other Irish resident would pay on the same income.

The real question here is why you are bringing all that income over here. Do you need to or can you leave some or all of it resting in your Canadian account (assuming you are not Irish domiciled)?

As far as I can see, if you left the salary earned through the Canadian business in Canada, you would not have to worry about Irish taxes – even at 10 per cent. You say you also operate here in Ireland as a sole trader and that clearly delivers some income, if not necessarily enough to meet all outgoings.

As with most issues governing cross-border taxes, I think it would be worth your while to secure specialist advice from a tax adviser familiar with the area and, even better, familiar with the Canadian tax code.

Quite apart form the income issue, you are also the part-owner of this company in Canada and that, in itself, could raise tax issues especially if the ownership structure was to change.

1 Basic income for all: Has the Covid crisis given us a new economic model?
2 Direct sea routes to Europe offer certainty in choppy Brexit waters
3 ‘I don’t need to do any of this. . .I don’t actually need to work.’
4 Online shoppers face unwelcome tax surprise
5 Promontoria barred from pursuing doctor over Ulster Bank loan
6 Only way is up for Stripe as valuation skyrockets
7 Kinzen raises $2.2m as it helps clients fight ‘misinformation’
8 Unilever’s Dutch and British arms merge after 90 years ahead of Brexit
9 Pandemic brings a halt to Zara-owner’s Irish expansion
10 Admission of mistake in Oxford vaccine dose raises doubts over reliability
Real news has value SUBSCRIBE
Save money on international transfers