Permo is cool on Ulster deal; red light for travel; and Johnny Ronan loses out 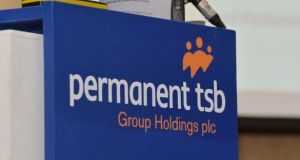 PTSB is unlikely to end up buying Ulster Bank

Permanent TSB boss Eamonn Crowley poured cold water on hopes of a merger between Permanent TSB and Ulster Bank, which is currently considering its future here. He spoke to Joe Brennan as the lender announced the sale of €1.4 billion in boom-time interest-only buy-to-let mortgages.

DAA airports authority chief Dalton Phillips is decidedly downbeat about the European Union’s traffic light system. Designed to free up travel, he will tell an Oireachtas committee this morning that it will instead create “confusion and chaos” because of a lack of harmonisation on quarantine and testing rules, writes Barry O’Halloran. The DAA will appears as well as Ryanair and Aer Lingus.

He may have adopted an uncharacteristically low profile of late but former Irish Nationwide boss Michael Fingleton can’t stay out of the news. Tim O’Brien writes that a plan to build 194 apartment on land behind the family home in south county Dublin are drawing the ire of local residents.

There’s good news today too, as online recruiter Indeed reports a surge in business and profits at its Irish operation and reiterates plans to create 600 jobs here over the next few years. Charlie Taylor reports.

Charlie also writes that Thriftify, an Irish start-up that helps charity shops beat the Covid-19 shutdown by selling online and which encourages ethical buying, has raised €500,000 to accelerate the rollout of its platform internationally. First stop, the UK.

And the average disposable income of Irish households rose by nearly 30 per cent between the financial crisis and last year, according to the Central Statistics Office, with after tax income averaging €53,118 last year. Eoin Burke-Kennedy notes that is also 8 per cent than the boom-time high in 2008. However, the figures predate the Covid crisis and are unlikely to be as bullish next time around.

Not everyone is upbeat though. Pat Rigney, the drinks industry veteran behind Leitrim’s Shed Distillery, home of Drumshanbo Gin, warns that another year like 2020 “will put us all under” even as the group reports record turnover for the year to September 2019. Charlie Taylor

And the industry group representing big developers warns that the housing crisis will be a “permanent issue in Irish society” unless there is a radical rethink on how to deliver more affordable homes, writes Eoin Burke-Kennedy reports

In our Money Matters column, Robert Armstrong argues that selling investment in funds that meet environmental, social and governance goals as a win-win option delivering both bigger profits and better social returns is a fallacy.

Johnny Ronan’s Ronan Group Real Estate has lost out on a ¤315 million deal to sell the hundreds of apartments it is developing at Spencer Place to US real estate investor, Cortland after repeated legal challenges by Dublin City Council to the height of the scheme. Ronald Quinlan has the story in Commercial Property.

In Limerick, Debenhams’ former store is on the market with a guide price of €9 million.

And finally, CBRE managing director Myles Clarke argues we cannot afford to wait for a Covid-19 vaccine before returning to the office.

Stay up to date with all our business news: sign up to our news alerts and our Business Today daily email digest.