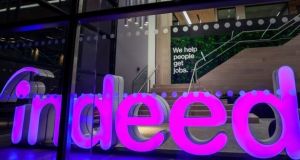 Online recruiter Indeed is proceeding with plans to create another 600 jobs by 2024 in Ireland despite the Covid crisis.

The company, which already employs more than 1,000 here, reiterated its commitment to its Irish operations as newly-filed accounts show revenues and profits surged last year.

Indeed opened its first office in Dublin in March 2012 with “three people and a pot plant”. In April 2019, it announced plans to create the new roles over a five-year period in a move that would take total headcount to 1,600.

“Notwithstanding the impact of Covid-19, Indeed remains committed to its plan announced last year to add 600 staff by 2024,” a spokesman told The Irish Times.

Earlier this year Indeed renewed a long-term lease it has on offices on Stephen’s Green, Dublin, despite recently opening a new headquarters at Capital Docks. All company employees are currently working remotely until next July due to the pandemic.

“Indeed delivered a strong performance last year both in Ireland and internationally, with robust growth in revenue. Ireland is key to our international strategy, and we remain committed to our base here,” said Daniel Corcoran, vice-president of strategy and operations.

“While the pandemic has disrupted many businesses and left millions of people around the world struggling to find work, we remain focused on our mission of helping people get jobs, which is more important than ever.”

Total equity attributable to owners of the company fell 62 per cent to €81.6 million from €213.8 million due to what the company described as a “significant spend on advertising and marketing”.

Employee numbers at the company rose by 36 per cent last year from 863 to 1,176 people, with related expenses, including wages and salaries, jumping from €78.7 million to €118.5 million.

Dublin is Indeed’s second largest global location, with the Irish arm responsible for all the group’s activities outside the US and Asia Pacific

During the year under review Indeed Ireland acquired two companies – Syft Online and Blackstone Point (which trades as ClickIQ) – for an undisclosed sum.

Indeed has sites in over 60 countries and 28 languages and more than 250 million people use Indeed to look for a new job via the company. Its dedicated Irish site, meanwhile, has over 3.3 million unique visitors each month. Globally it employs over 10,000 people.

The company, which generates revenue through paid-for job ads on its website, was co-founded by Paul Forster and Rony Kahan in 2004, and subsequently acquired by Japanese group Recruit Co in 2012.