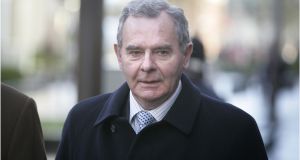 Businessman Seán Quinn: QuinnBet said at the time of its launch that the venture was being funded by Mr Quinn snr, but that he was not involved in its operation. Photograph: Dara Mac Dónaill/The Irish Times

A London-based Irish businessman, Val Flynn, formerly involved in the aviation sector, has joined the board of QuinnBet, the online betting operation set up by Seán Quinn in 2017.

Company filings show that Mr Quinn, and his son Seán jnr, resigned as directors from the regulated business in May of this year.

Also in May, new shares were issued to one of Mr Quinn’s daughters, Brenda Quinn, as well as to the children of Seán Quinn jnr, with the latter shares being held in trust.

Accounts for the business are abridged, and give no information as to turnover, profitability or any loans received by the business. Last year Mr Quinn snr said in a media interview that the business had made a profit in its first six months.

QuinnBet said at the time of its launch that the venture was being funded by Mr Quinn snr, but that he was not involved in its operation. His son was the then chief executive.

Both Quinnb Sports and Belbridge are associated with the QuinnBet online venture, which offers betting on sports fixtures as well as an “online casino” and other gambling activities including “QuinnLotto”.

Customers can make payments to QuinnBet by Visa or Mastercard or via online e-money transfer services Neteller or Skrill, according to its website.

Mr Quinn snr now owns 200,000 non-voting ordinary €0.001 shares, according to the latest filed annual return, with Belbridge no longer having an interest.

This indicates that Mr Quinn now owns just over half of the company, but has no voting rights. It is not known if Belbridge is still linked to QuinnBet. A request for a comment from QuinnBet met with no response.

According to its website, QuinnBet is partnered with sportsbook and casino platform providers FSB Technology (UK), “which is fully licensed and regulated by the UK Gambling Commission and in Ireland under the Betting (Amendment) Act 2015”.

When it was being launched, QuinnBet said that Mr Quinn jnr, Mr Quinn snr’s son-in-law Stephen Kelly, and another then director, Séamus McMahon, had received certificates of personal fitness to run a bookmaking business. Mr McMahon is related to Seán Quinn snr.

A law passed in 2015 required that all officers of companies licensed as bookmakers should have to have the necessary certificates.

Mr Quinn was the founder of the Quinn Group and was one of Ireland’s richest business figures before high-risk investments by him in Anglo Irish Bank contributed to the collapse of the group, and the bank.

Quinnb Sports and Belbridge both have their registered offices in the Connell Building, Main Street, Ballyconnell, Co Cavan.

As well as Mr Flynn, the other directors of the two companies are Mr Kelly, the husband of Mr Quinn’s daughter Aoife, and Denis Kelly, who has an address in Ballyconnell.